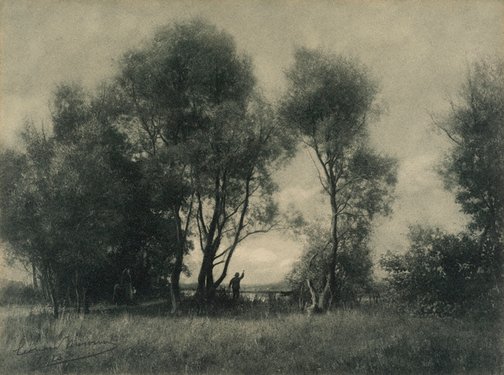 Belgian photographer Léonard Misonne trained as an engineer but decided to pursue a full-time career in photography in 1886. He subsequently exhibited his work widely in Belgium, France, Holland, America and England. Later referred to as the ‘Corot of photography’, his popular pictorial style for depicting the figure in the landscape was deeply evocative of the Barbizon School of French painters with whom he frequently associated.

Misonne’s photographs suggest an overriding concern with the way that ambient qualities are able to transform the environment, and the pictorial strategies to best convey their effects. He explained that ‘my method consists essentially in the search for effects of light and atmosphere. No matter how interesting the subject, it rarely suffices, from an artistic viewpoint, in itself.’1 Misonne’s photographs of the everyday landscape were translated through an impressionistic manipulation of light. He would invariably photograph in the early misty morning to maximise such effects in his photographs, which were enhanced by the use of the ‘painterly’ outcomes of the bromoil processing technique which he used from 1915 onwards. ‘Au passage d’eau’ is indicative of Misonne’s pictorial brand of softened realism with which he gained acclaim. The work also reveals one of Misonne’s key compositional techniques, which images the landscape from a distance while obliterating the details of the background horizon to present an intimate portrait of the figure within it, bathing its silhouetted features in a soft glowing light.