A 17th to 18th century bowl with an image of the poet Su Shi (1037-1101) visiting the Red Cliff region. The poem painted on the side refers to the military events that took place in the Red Cliff area. This imagery seems to have been common on export wares, and it resembles 'bleu de hue' wares that were popular in Vietnam. These wares are characterised by a dark rim, which is supplied by the metal in this instance, but the mark on the base does not correspond to such pieces. The mark combines an unusual character that looks as if the artist was unfamiliar with Chinese writing with the one for jade ('yu').

Browse other works by Southern kilns 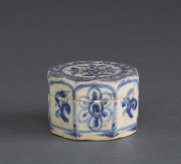 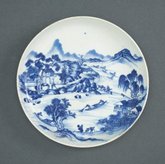