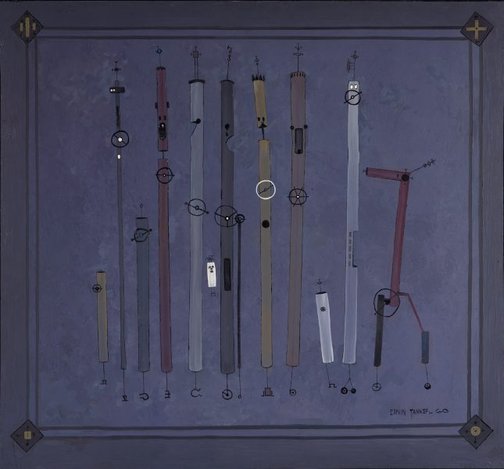 Born in Wales in 1920, Tanner came to painting late in life at the age of 30, having apprenticed as a carpenter and then taking up studies as an engineer, during World War II he became a crack shot and was seconded from Australian Iron and Steel to the Department of Aircraft Production as Deputy Engineer-in-Charge of Aircraft Design in 1942. His love of aviation would translated into his work during the 1960s.

In 1950 Tanner and his family moved to Tasmania where he worked as a civil engineer for the Hydro Electric Commission of Tasmania. However, inspired by watercolours made by a colleague, Tanner enrolled in a Diploma of Art course and began to create his idiosyncratic compositions, somewhat influenced by the work of French painter Bernard Buffet, whose work he had seen firsthand in Hobart in the 1953 travelling exhibition 'French painting today'.

'The science faculty' 1960 derives from a series of works that utilise the emblematic devices of pipes and imaginary wind instruments – their gaping apertures suggesting the animated discussion of a group of dons – with the title suggesting a po-faced commentary on social hierarchies within the academic scientific world. Assembled across an expanse of clinical, stainless-steel grey, the tweed, grey and white lab-coat-coloured cylinders cavort. The atmosphere is somewhat surreal and critics of the time often associated his work with that of the Swiss painter Paul Klee, who had similarly explored a pictorial language of distinctive forms which carried symbolic power to the viewer.

Following extensive overseas travels in 1966 under the auspices of a Churchill Fellowship, where he took in Europe, Japan, the USA and England, Tanner returned to Australia, settling in Melbourne in 1967. That year he suffered a severe stroke, and his physical health problems and chronic pain impacted his creative output for the rest of his life. Tanner died of a brain tumour in Melbourne in 1980, following the critically successful retrospective exhibition of his work held in Canberra and Melbourne the previous year. 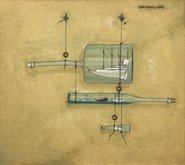