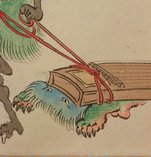 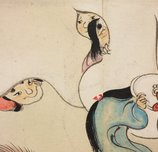 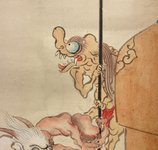 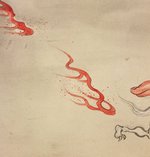 A humorous yet revealing image of anthropomorphic beliefs, this scroll depicts a medley of 'object-goblins' - kitchen utensils, musical instruments and the like. Recent scholarship explains that, according to old Japanese belief, objects that reached 100 years acquire a spirit. One surviving narrative scroll from the Muromachi period tells how used objects, discarded during the spring-cleaning of a temple, turned into demons and wreaked havoc on the village until a Buddhist monk quelled them and eventually turned them into good Buddhists. This scroll is one of many existing versions of the subject. As a pictorial representation, the scroll can be seen as part of the Japanese caricatural cartoon tradition that continues today as 'manga'.

ink and colour on paper

Jackie Menzies (Editor), The Asian Collections Art Gallery of New South Wales, 'The art of Buddhism and other worlds', Sydney, 2003, 196-197 (colour illus.). The colour illus. on page 197 are details of this work.