The spider's touch, how exquisitely fine! Feels at each thread, and lives along the line (Alexander Pope) IV 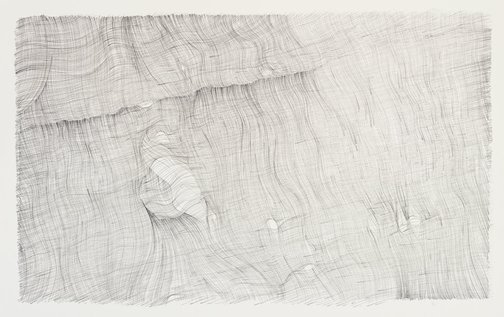 Rubaba Haider is a Hazara woman who now lives in Melbourne, having fled Pakistan as a result of ethnic persecution. Haider’s career began with the study of the intricate art of miniature painting at the National College of Arts in Lahore, Pakistan. Her training was intensive with her degree condensing eight years of a traditional miniatures apprenticeship into two years. While studying, she learnt traditional miniature painting techniques; once these skills were mastered Haider was encouraged to experiment and explore the medium’s potential applications within a contemporary context, with no restriction on medium, style or scale. Haider has since extended her artistic practice to include contemporary painting and installation, and draws upon her experiences to invoke notions of trauma and healing.

Haider seeks to redefine the traditional techniques of miniature painting, weaving and embroidery through her artwork, often by meticulously depicting needle and thread in paint and paper. She chooses to subvert traditional crafts by using traditional materials such as handmade wasli paper (used specifically for painting miniatures) in an unconventional manner. Haider’s meticulously rendered and repeated threads and stitches evoke scarring and fissures that stand in for memories of wounds and of families and communities torn apart by violence and warfare. The simplicity and delicacy in her paintings also reveal the fragility of relationships, and how a mere thread can bind everything together, but if it breaks, then everything can fall apart. Haider says, ‘I like the way the fabric could represent relationships…the way it stretches and strains but still holds together.’

Rubaba Haider
The spider's touch, how exquisitely fine! Feels at each thread, and lives along the line (Alexander Pope) IV

Browse other works by Rubaba Haider