(The autumn mountain at sunset) 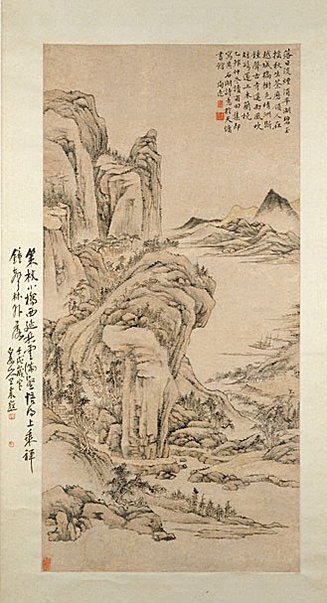 During the 1700s, Wang Yuanqi and Wang Hui were highly influential and attracted a great following of both pupils and imitators. Those who adopted the style of Wang Yuanqi are known as members of the Loudong school, the name of which - 'east of the river Lou' - came from Taichang, the home of Wang Yuanqi. Among his followers, Huang Ding, Fang Shishu's teacher, was perhaps the most accomplished. Therefore, although Fang Shishu, a native of Yangzhou, is not generally mentioned as an artist of the Loudong school, the fact that he was a pupil of Huang Ding makes him a part of this tradition. According to his biography, Fang Shishu was already considered better than his teacher at an early age. Even during his lifetime, people treasured and even forged his paintings. They believed that if he had lived longer, he might have had the same reputation as the two Wangs.

This painting exemplifies the Loudong school tradition, which has persisted in China until today. Characteristic are the dry-brush strokes. The evolution and perfection of this technique - from such Yuan painters as Huang Gongwang (1269-1354) and Ni Zan (1301-74), through Wu school artists such as Wen Zhengming (1470-1559) and Songjiang painters such as Dong Qichang (1555-1636), to early Qing classicising artists such as Wang Yuanqi - represent a persistent quest for a means of expressing the spirit of the literati in its purest, simplest and highest form.

Although in this painting the otherworldliness has been suggested by the sparse autumnal scene and by the dry-brush strokes, the reference to the concept of transcendental realms is still very subtle.

The expressive content is not readily apparent unless one conjugates the image with the poem inscribed on the painting, which reads:

'Thin mists fade at sunset,
The smooth lake ripples like green jade.
The autumn is arriving, from the mountain ridges where tumi [a Chinese wild bush] grows,
A man is walking across the bridge.
The colours of the trees block the view of the serene sky,
The ringing bells indicate an old temple afar.
The westerly wind blows through one's hair,
It is time to sail off, rowing a boat made of mulan [magnolia].'

Here is felt the mixture of reflection on seasons gone, the gentry ideal of the 'retired life' and the religion of free nature. The temple bell further suggests how much the idea of a monastic career has been amalgamated with such a sentiment. Since 'mulan', or magnolia, is a well known metaphor referring to the famous poet Qu Yuan (c340-286 BCE), with reference to the purity of one's inner world, to sail off symbolises the moral integrity and rustic simplicity which traditionally belong to the ideal life of the retired gentleman. The lines echo a popular theme in Chinese painting: the so-called 'yuyin' or 'reclusion in a fishing boat' theme. Those who sail off on boats in the mountain stream were not fishermen but rather recluses. The painting is dated in Fang's colophon to 1735.

An unexpected inscription by the later artist Wang Zhen (1867-1938) appears on the side of the scroll. Wang's poem is written on the mount and is an allusion to his Buddhist faith:

'Strolling along the Western banks of the stream,
With the autumnal clouds filling the gully,
While hearing the sounds of bells fading into the clouds
One suddenly realizes the truth of Chan Buddhism.
Inscribed by Wang Zhen, white dragon hermit, in the year renxu. [1922]'