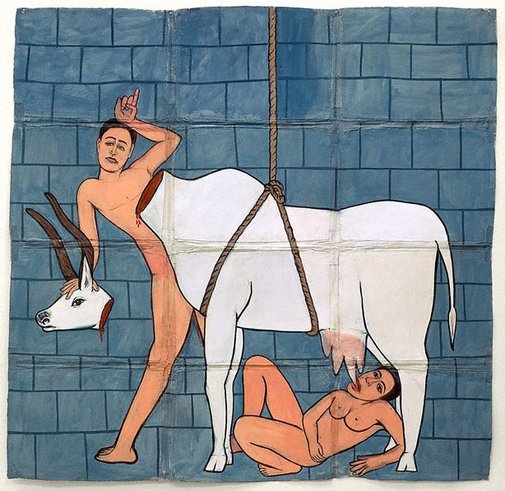 A conceptual artist in the 1970s, Francesco Clemente soon turned to figuration with intensely subjective and erotic imagery. Known in Italy as part of the Transavantgarde group, which also included Sandro Chia and Mimmo Paladino, Clemente moved to New York in 1980 after a period of time in India. Clemente embraces elements from baroque and tantric symbolism to the occult, abject and sexual, often influenced by his trans-national existence living between New York, Madras and Rome. Exhibited along with other Transavantgarde painters at the Venice Biennale in 1980, he is considered one of the leading artists in the new-found expressionism of the period.

Much of the iconography, imagery and symbolism in his work of the 1980s came from sources gathered during his early visits to India. An aggregation of visual elements, they were a collection of sorts, a growing and living resource for him to pick and choose from, incorporating them into his works to create notational rather than representational images: the ideas growing out of phrases or things heard or read, layered with influences from diverse sources such as William Blake or Cy Twombly. When working, Clemente doesn’t feel ‘that the work really belongs to me. It really seems that it’s something that flows, and that I lead from one point to another. I feel like I’m a messenger between two worlds’.1

Like many of his paintings, ‘Water and wine’ is heavily influenced by his contact with the imagery, spiritualism and mythology of India. Recalling his interest in the fragmentation of self, Clemente portrays himself standing next to a beast that he has beheaded in a ritualistic slaughter and which in death is held upright by the aid of a knotted rope, signifying masculinity. In ‘becoming’ the animal, Clemente holds the beast’s head, making a sign with his left hand which mimics the horn of the cow or cuckold (referring to a duped husband) enhancing his sexuality and animality despite the absence of his genitals. He often uses the hand gesture, symbolic of sacred mantras and Indian dance, to signify human destiny. It is also evocative of the Italian amulet of the ‘mano cornuto’ used to ward off the evil eye that harms nursing mothers, babies, bearing fruit trees, milking animals, and the sperm of men. The key to this work is in its duality: the beast is bull and cow, male and female, symbol of maternal nourishment and cosmic generative power. The woman’s suckling of this hybrid beast/man is therefore sexually charged, the figures’ nakedness simultaneously revealing their innocence, sin and mortality. The title is a biblical reference to Christ turning water into wine, which, alongside the symbols of Hindu and cosmic mythology, reflects Clemente’s interest in the theo-sophical motto of ‘all religions are one’.

tempera on twelve sheets of handmade paper mounted on cloth

Browse other works by Francesco Clemente