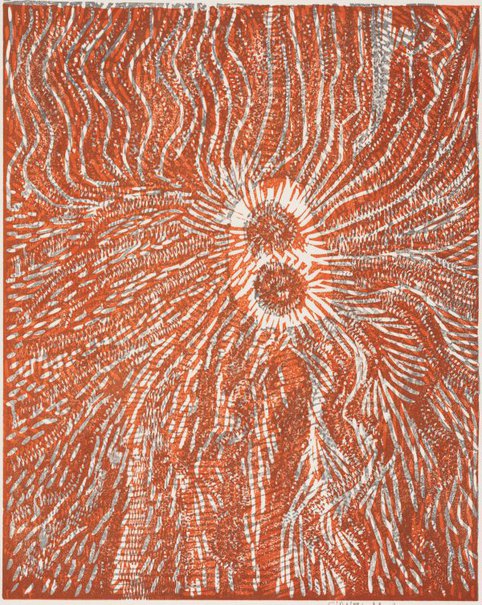 Sidney Moody is a Kukutja artist based at Wirrimanu (Balgo) in the Western Desert region. He is married to the renowned artist Madeleine Nowee and they both work through Warlayirti Arts, the Aboriginal owned and managed art centre based in Wirrrimanu. Moody began exhibiting in 2013 and his practice is inspired by both his country, Nyila and that of his wife's father, Truriljarra in the Gibson Desert.

Truriljarra is the name given to the site of two waterholes close by one another, as seen in the two circular elements within 'Truriljarra' 2013. For the majority of the year these waterholes remain dry, however, when the moon reaches its fullest phase, the waterholes fill with water. The surrounding landscape is dry and vegetation sparse, although many kangaroo can be found here. Created using Japanese-style woodblocks, the mark making within the work has similarities to carving on wood within the Western Desert, particularly on shields.