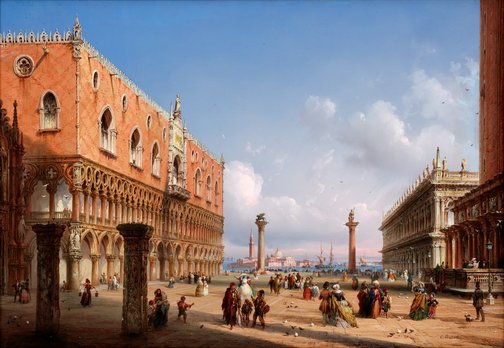 Carlo Bossoli was born near Lugano in Switzerland in 1815 and grew up in Odessa in the southern Ukraine. As a young artist, he attracted the patronage of Countess Vorontsov, wife of the governor of the province, and by the age of eighteen was selling his drawings of urban views and landscapes. He travelled extensively around the Crimea and produced many drawings and watercolours of the main sites and cities there. Bossoli returned to Europe in 1843, settling in Milan then Turin. In 1850, he visited to England and Scotland, and the following year Spain and Morocco.

During the Crimean War, Bossoli travelled to London, where he produced a series of 52 Crimean views which were made into lithographs for a lavish volume published in 1856. Queen Victoria and the Duke of Wellington bought his work. An inveterate traveller, Bossoli became a well-known topographical artist. He also produced a series of over a hundred gouaches illustrating the military campaign for the independence of Italy, now housed at the National Museum of Risorgimento, Turin.

In September 1847 Bossoli made his one and only visit to Venice. This highly finished composition in gouache and watercolour almost certainly dates from around this time. 'View of St Mark's Square Venice' also relates to another watercolour of the same size depicting the square under snow (private collection, Turin) however it is not known if the pictures were conceived as pendants. The list of Bossoli’s own works, drawn by the artist himself, includes about twenty paintings with Venice as the subject. Bossoli’s Venetian views (along with those of Constantinople) were his most popular and profitable during his lifetime.

watercolour, gouache on paper laid down on canvas