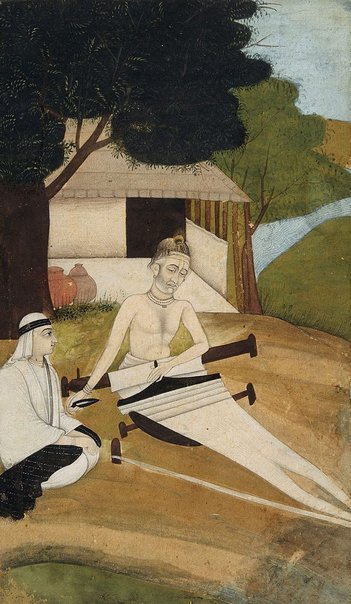 'Too many, many roles,
these parts I've played,
and now I'll part from them.
Too tired of all pretense,
Tuning, tuning the strings,
and now it's over, done -
Thanks to the name of Ram [God],
I haven't another dance to dance and my mind
Can no longer manoeuvre the drum.
Life's postures love, hate -
lost to the flames:
The craving-filled kettle drum finally burst.'

In the song ('pada'), the mystic poet Kabir (1440-1518), one of the best known poets in North India, and a pioneer of Hindi devotional verse, has used the dancer as a metaphor for the overcoming of desire. In another song, similarly reflective of his wise teaching, he uses the musk deer, searching for the fragrance of the musk without realising it emanates from itself, as a metaphor for the finding of god within oneself.

By tradition a low caste weaver from Benares, Kabir became a symbol for self-respect movements amongst the lower castes - their guru who taught them using the vernacular. He is also the founder and one of the greatest figures of the Sant tradition, a counterpart of the 'bhakti' movement which, like it, emphasised love as the characteristic emotion of true religion. The Sant rejected all Hindu ceremonies, scriptures, and caste distinction, teaching that the path to enlightenment was within oneself.

Paintings of Kabir are rare, and this modest example depicts him weaving in humble surroundings. Kabir's teachings reflect both Hindu and Muslim traditions and one of the many legends about him (as also related of Guru Nanak) concerns his death at which time his Hindu followers wanted to cremate his body, but the Muslims insisted on burial. When they drew back the sheet over the corpse, it had turned to flowers. [JM]