Landscape with villagers and laundresses 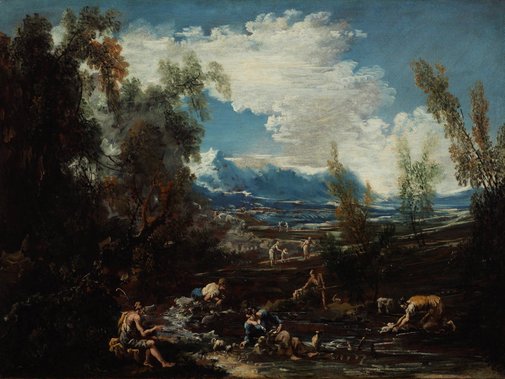 Magnasco was born in Genoa but moved to Milan around 1681 where he trained with Filippo Abbiati. He began as a painter of eccentric genre scenes and also collaborated with other painters, including the landscapist Antonio Francesco Peruzzini, by adding small figures into their landscapes and architectural views. From the 1720s Magnasco began to create landscape and architectural settings which provided the background for his own figures. Working for the court of Ferdinand de’ Medici in Florence, c1703–09, Magnasco began to develop a novel repertoire of themes based on Dutch ‘low-life’ genre painting with a marked taste for the grotesque. Returning to Milan he was patronised by the local aristocracy and completed a series of canvases illustrating the interior worlds of monasteries and convents, many of which suggest an ambiguous attitude towards the church. The last period of Magnasco’s career, from 1735, was spent in Genoa. Magnasco painted in a highly personal style, notable for its vigorous, fragmented brushwork and its dark, sometimes menacing mood. His unique treatment of uncommon and often disquieting subject matter is suggestive of larger tensions within the society and culture of the day. Magnasco was highly successful during his lifetime but was forgotten during the 19th century. His work was rediscovered in the early years of the 20th century by the German art historian Benno Geiger, who compiled the first catalogue raisonné.

Peasants at work in a extensive river landscape

Sir Francis Cook, 1939-1978, Richmond/Surrey/England, By marriage to his wife Lady Brenda Cook. The painting was on loan to the Manchester Art Gallery from 1964–82.

M W Brockwell, Abridged catalogue of the pictures at Doughty House, Richmond, Surrey in the collection of Sir Herbert Cook Bart, 1932, p 33, no 554. 'From Esher'.

Important old master pictures, London, 06 Jul 1984, p 195, no 114, col illus p 194. As 'An extensive wooded river landscape with washerwomen and peasants in the foreground'. The Property of the Trustees of The Doughty House Trust.

The Magnasco Society. Catalogue of a loan exhibition of pictures of the XVII & XVIII centuries, London, 1925, p 7, no 2. As 'Landscape with figures', lent by Sir Herbert Cook, Bart.