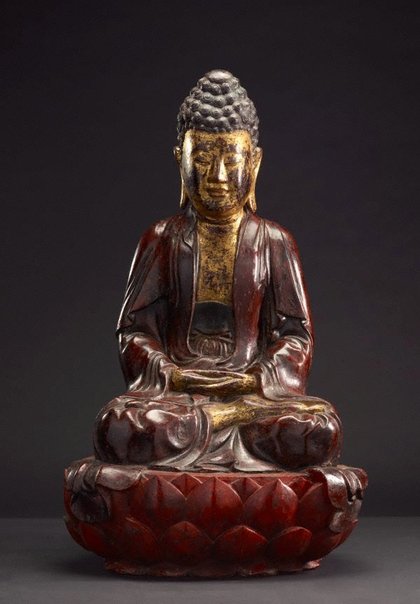 Vietnamese Buddhism, introduced into Vietnam in the 2nd century CE, is of the Mahayana school. Although often aligned with Chinese Buddhist practice, it should probably be characterised as syncretic. However, this particular piece, probably created at the time of the Mac dynasty (1527-1592) or the later Le dynasty (1428-1788), is stylistically similar to Chinese pieces of the Ming dynasty (1368-1644). The robes are Chinese in style, although the proportions of the figure reflect a Vietnamese sensitivity. The piece, characteristically covered in heavy red and gold lacquer, is stylistically typical of popular Buddhist figures found in local temples throughout Vietnam. The lacquer comes from the Vietnamese tree called Cay Son (Rhus succedanea).