Kingston has long held a fascination for Sydney's maritime tradition, with its fleet of ferries gliding across the harbour, its wooden wharves and weathered docks. Having lived most of his life on the city's foreshore, Kingston captures in charcoal, oil and ink its transformation from a largely industrial working harbour to a playground for the rich and powerful.

When developers prepared to demolish Pier 6/7 at Walsh Bay in 1998, Kingston’s outrage was manifest in a series of drawings, prints and paintings shown in the exhibition 'Hurry, last days' in 1999. Aiming to capture the poignant beauty of these dilapidated structures before their demise, Kingston's drawings are precisely observed, expressed with an energy and passion which convey his commitment to the preservation of Sydney's architectural heritage.

"The finger wharves came from a period when people worshipped work. They were built of turpentine. You couldn't build them today; the forests have all gone. They stand for the uniqueness of this city, Sydney as a working port instead of this One.Tel generation of townhouses. They represented a simpler form of life." Peter Kingston, 2001

Australian Galleries Works on Paper, Sydney (Compilator), Hurry, Last Days, Sydney, 1999. cat.no. 19; Note that this is a text reference only, no pagination provided.

Browse other works by Peter Kingston 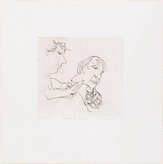