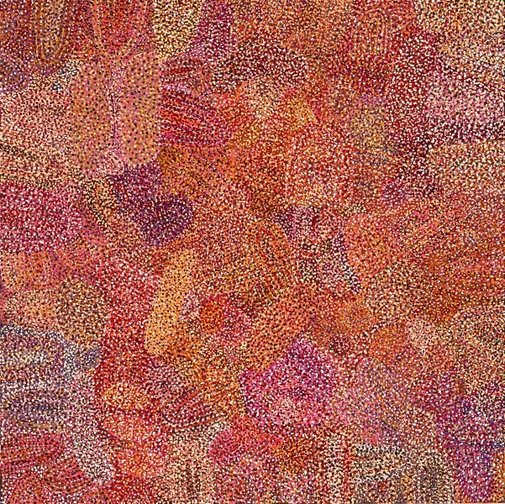 Kunmanara (Ngupulya) Pumani was a senior Pitjantjatjara artist from Mimili in the Southern Desert region. She was part of a renowned artistic family, with her mother, Kunmanara (Milatjari) Pumani, and her sister, Betty Kuntiwa Pumani both recognised painters. Kunmanara Pumani began painting in 2009 and worked through the Mimili Maku Arts Centre. Pumani was recognised for her commitment to Pitjantjatjara law and culture and her works are imbued with the cultural knowledge and artistic skill that come from a lifetime of learning.

In 'Maku inmaku pakani' 2014 Pumani offers an exquisite depiction of the Maku (witchetty grub) tjukurpa at Antara. This site is dominated by two rock holes which women care for and celebrate in song and dance when they are full of rainwater. Also important at the site are the plentiful Maku, which are dug up from beneath the witchetty bush and roasted on coals. The red granite boulders that distinguish this landscape are depicted beneath the complex and celebratory field of dots that celebrates the cultural activities of women at Antara and their ongoing role in caring for country.