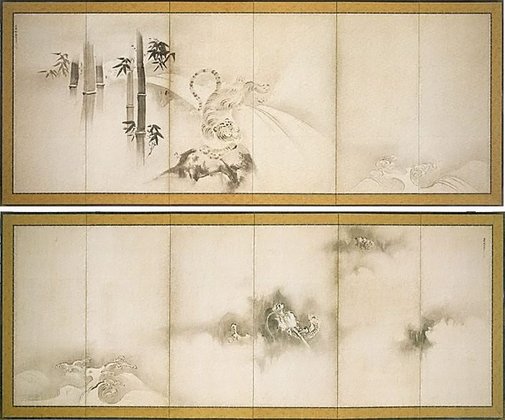 When Kanô Tan’yû died in 1674, he was the patriarch of the Edo branch of the Kanô family and chief painter to the military government in the capital Edo. Laden with honours from both the Buddhist church and the Imperial Court, he was honoured and respected as the chief protagonist of the traditional style of ink painting. His followers were numerous; his influence far-reaching.

Tan’yû received many commissions to decorate the interior rooms of important monasteries in the ink style. This pair of screens can be dated to his early maturity in the 1640s because of its stylistic affinities with two other important tiger and dragon commissions he received: the sliding door paintings (‘fusuma-e’) in the Abbot’s Residence of the Kyoto monastery of Daitoku-ji (1641), and the ceiling painting in the famous Tôshôgû shrine at Nikkô, just north of Tokyo (1652). The signature on these screens is one he was using at this time also: he has signed the screen with the name ‘Tan’yûsai’ and has attached the honorific title of ‘Hogen’ (literally ‘Eye of the Law’) which he was awarded in 1638.

Dragons and tigers, for long prominent in traditional Chinese cosmology where the dragon was identified with ‘yang’, the male principle, representing spring, rain, sun and light; and the tiger with ‘yin’, the female principle representing autumn, wind, the moon and darkness, were absorbed in Japanese Zen imagery, and appeared often on the walls and screens of monastic dwelling chambers. The motifs spread from Zen circles into the secular world and especially appealed to the military classes, tigers serving also as symbols of strength and virility. The Kanô school, chief exponents of the Chinese style, and painters to the Shogun and the samurai, often painted the tiger and dragon subject. Tan’yû’s tiger and dragon are not the ‘fearsome’, aggressive creatures of earlier times, but playful, gentle animals. The pair are skilfully realised within their space, Tan’yû successfully evoking the endless spaciousness of the cosmos in the dragon screen by a few definitions of cloud.

Masculine subjects and symbols of power such as the dragon and tiger were popular painting themes among the warrior patrons of 17th century Japan.