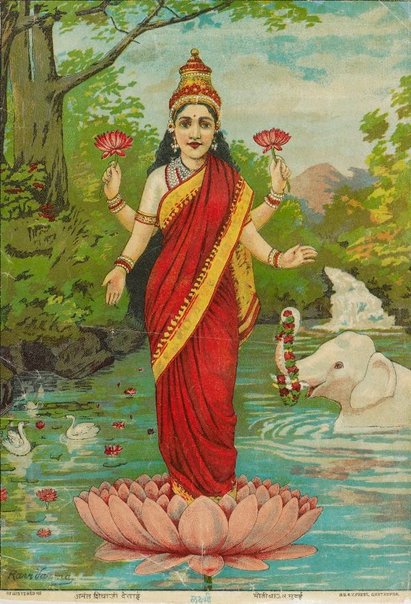 The strength of Raja Ravi Varma’s (1848–1906) artistic vision was considerable in guiding the way that goddesses were imagined and visualised in British India. Varma, who was from an aristocratic background received his training from visiting court painters and became a well known portrait painter who was also commissioned to paint large scale religious scenes. In 1894, recognising the commercial advantages of modern technologies he and his younger brother Raja Raja Varma
imported a press from Germany and began to produce coloured printed versions of his oil paintings. Such prints, used in homes and for worship were part of the trend that used Western naturalistic art forms to explore Indian themes. However by 1901 the business was a commercial failure and the German engineer Fritz Schleicher who had been brought out to install and maintain the press took over the business, moved it to Lonavla near Poona and continued to produce images from Varma’s designs.
This print which was produced by the Varma brothers in Ghatkopar , Mumbai was possibly the first design produced by Ravi Varma’s new press and depicts the Goddess of wealth, Lakshmi. In contrast to earlier depictions of a seated Lakshmi by printing workshops in Kolkata here she is found standing on a pink lotus with a white elephant at her side. Two English inscriptions along the base read, Ravi Varma and RU., and V. Press Ghatkopar
The relevance of this work to the gallery’s collection is made more significant due to its appropriation by Pushpamala, (an important contemporary artist), in her series 'Native women of South India' that also forms part of the AGNSW collection [acc.no. 81.2010.a-j].