One and three tables 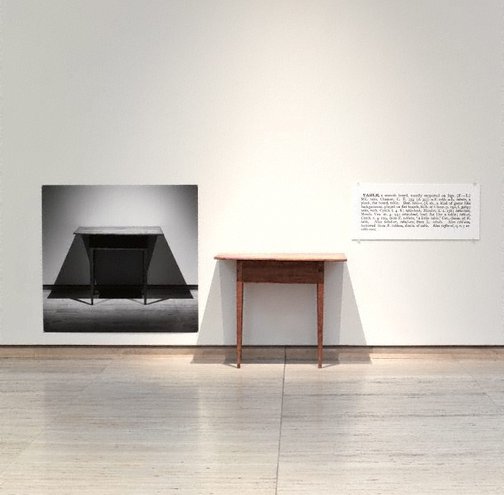 When he arrived in New York in 1965, Joseph Kosuth was a 20-year-old recent graduate from art school, yet he quickly established himself as a founding member of the conceptual art movement in the United States. At this time Kosuth was inspired by philosopher Ludwig Wittgenstein’s investigations of language. Wittgenstein’s posthumously published book ‘Philosophical investigations’ was a radical departure from previous philosophical texts, presented as a series of aphorisms that proposed assumptions from the traditional Augustine view of language and then deconstructed them, exposing the impossibility of using any set of rules to explain how we learn and use language.1

In 1965 Kosuth conceived a number of works using words written in neon that conveyed nothing more than what they were: ‘Five words in red neon’, for example, consisted of the five words of the title written in red neon lights, while ‘One and eight – a description (pink)’ consisted of the words ‘Neon Electric Light English Glass Letters Pink Eight’ written in pink neon lights.2 The next year he started his ‘Art as idea as idea’ series, in which he printed enlarged dictionary definitions of words in negative (white text on black ground). He deliberately chose words that commonly appear within the lexicon of art writing, words such as ‘original’, ‘meaning’ and ‘material’.

In the series ‘One and three’ Kosuth poses the question, ‘What do we mean by a specific word such as “table”?’ He placed a pre-existing object in a gallery space next to a photograph of that object taken in situ, and a dictionary definition of the word used to describe, generically, that object. The viewer is led to compare the levels of accuracy in communicating meaning through both visual and verbal means. The dictionary definition is more accurate as a generic description of a table, whereas the photograph is more accurate as a description of this specific table. Yet removed from its functional context and placed in a gallery, even the table itself is only a sign: a three-dimensional and generic ‘example’ of what might be meant by the word ‘table’.

Displayed as a triptych, the three signs for ‘table’ are all ultimately unsatisfactory as signifiers of the word if shown to an individual who had never before come across the notion of ‘table’. By exposing the limitations of language in such seemingly simple and concrete words as ‘chair’, ‘table’ or ‘broom’, Kosuth questions the possibility of using any language, and specifically, the language of the visual arts, to convey the meaning of more abstract phenomena such as ‘love’, ‘spirituality’ or even the meaning of the word ‘art’ itself.

1. Ludwig Wittgenstein, ‘Philosophical investigations’, GEM Anscombe (trans), Basil Blackwell, Oxford 1953
2. This work is in the collection of the National Gallery of Australia, Canberra

Joseph Kosuth
One and three tables

Browse other works by Joseph Kosuth