The wooden box in which this piece is stored (according to the Japanese custom), indicates that it was once in the possession of the Kyoto Zen temple of Tenryu-ji, which was ranked first among the major Zen temples in Kyoto during the Muromachi period (1392-1568). Modelled on a wooden prototype with a pair of incense holders attached, the tablestand would have been produced for the local Chinese market and have been brought back to Japan by a Zen monk. Zen monks played a significant role in the import of Chinese culture to Japan.

Desk stand with relief decoration of flowers and animals

Browse other works by Longquan ware 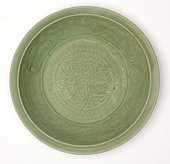 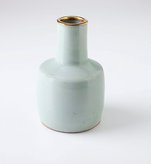 Longquan wareVase in the shape of a well bucket 17th century382.1997