Many of Mikala Dwyer’s seemingly abstract sculptural forms and her more directly representational sculptures originate in her interest in shelter, the home and urban structures. This interest often focuses on such primary manifestations of the desire for habitation as a child’s urge to construct cubby houses, small domains in which children exert control over their environment and the meanings of things. Dwyer’s work is characterised by a playful and excessive accumulation of elements, and she has created installations out of fabric, play dough, stockings, felt, vinyl, plastic, organza and nail varnish. Her choice of materials has been identified as feminine and by extension as a subtle feminist critique of recent art history. However her teasing references to modernist abstraction, the more organic forms of minimalism and to pop art (such as the saggy Kenneth Noland-like target forms and Oldenburg-esque baggy vinyl shapes in ‘Hanging eyes’) are an acknowledgment of antecedents rather than necessarily having a critical agenda.

The room installation ‘iffytown’ is comprised of four components – ‘un’, ‘Hanging eyes’, ‘IOU’ and ‘iffytown’ – which can also be exhibited individually. The installation was conceived as a schematic urban environment, but one that embodies imaginary and psychological responses to the idea of a city rather than to any town planning reality. ‘un’ is a wall piece in which a roughly modelled town has its own inverted double hanging underneath, a doppelganger which echoes the scene we see on top and seems to literalise the idea of a city having a hidden other life just beneath the surface. A cluster of colourful PVC plumbing pipes entitled ‘iffytown’ rises up from the gallery floor and hangs down from the ceiling. Dwyer’s awareness of the contingent and even inadequate nature of her urban enterprise is suggested in the title; however the assemblage of colourful tubes engages in a form of childlike substitution in which the shapes and their arrangement stand in as schematic forms for dwellings, skyscrapers and public spaces.

‘Hanging eyes’ is a disembodied form which oversees this enterprise, a combination of body bag and vaguely erotic anthropomorphic object. The soft sculpture eyes sag from the wall in an abject manner, seemingly undertaking a surveillance of the rest of the installation. The cubby house shelter ‘IOU’ has a mirrored lid propped up against it. Spilling out from the cubby are three-dimensional letters with openings, add-ons and furniture inside. The phrase ‘IOU’ has appeared in a number of Dwyer’s works and if, as American artist Vito Acconci has said, ‘public space is leaving home’,1 the IOU acknowledges much more than a debt to the recent history of sculptural art. Dwyer’s simple abbreviation enters into a humble exchange with the audience, suggesting the importance of bringing private associative imaginary realms into public institutions.

Sylvie Couderc, Bonheurs des Antipodes, 'Recent contemporary art in Australia: from the interpretation of origins to the bias of the diverse', France, 2000.

Browse other works by Mikala Dwyer 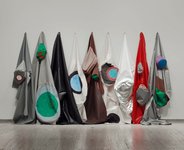 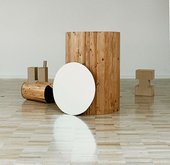