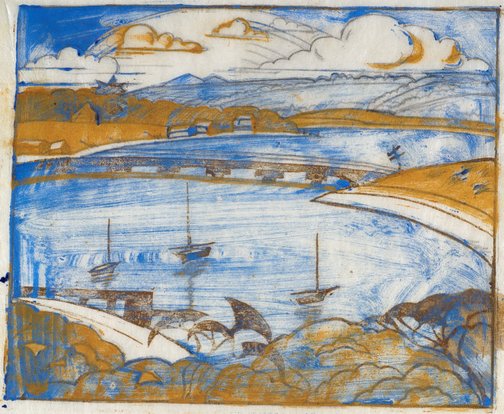 Eveline Syme was a central figure in a group of Australian artists whose rendering of modernist principles in printmaking were a highpoint of modernist aesthetics in Australia during the interwar period.

Born in Melbourne into a privileged family (her father Joseph Cowen Syme was the proprietor of The Age newspaper), Syme studied art intermittently in Paris between 1921-24, including with Maurice Denis at the Academie Ranson and with Andre Lhote. She discovered the work of British artist Claude Flight in Melbourne in 1928 via his newly published book ‘Lino-cuts’, which prompted her to travel to England in Janauary 1929 to study with Flight at his Grosvenor School of Art.

Here was something new and different, lino-cut no longer regarded as a base form of woodcut, but evolved into a distinct branch of 20th Century Art. I had seen nonthing more vitral and essentially ‘modern’ in the best sense of the word that the reproduitons in this book…’ (Syme, 1929)

This print is a working proof for a colour linocut made in an edition of 25. It differes from the editioned work in the inking of the blocks, which is more painterly and experimental.

artist's proof from edition of 25

Browse other works by Eveline Syme 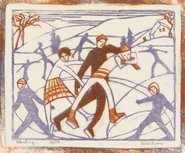