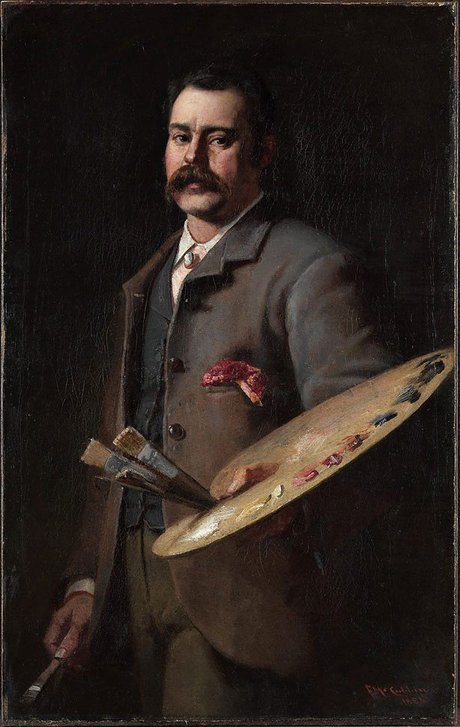 Frederick McCubbin was one of the key founders of the Heidelberg school of Australian impressionism. Like Tom Roberts and Arthur Streeton, McCubbin subsequently became inspired during the 1890s to create large-scale pioneering history subjects, which contributed to the formation of a mythic national iconography in the years leading up to Federation.

The son of a baker, McCubbin began sketching in the inner suburbs of Melbourne in the late 1860s, where he met Louis Buvelot, a Swiss-born artist whose naturalistic landscapes of the domesticated Australian countryside had a great impact on his later work. From 1867 to 1870 McCubbin attended evening classes at the Artisans School of Design at Carlton where he befriended fellow artists Louis Abrahams and Charles Douglas Richardson. He then enrolled at the National Gallery of Victoria Art School and studied under the romantic landscape painter Eugene von Guérard and later with George Folingsby, an artist whose primary interest lay in academic figure and narrative painting and who had a substantial influence on McCubbin’s development.

In 1880 McCubbin, along with a group of students, signed a petition to the trustees of the National Gallery of Victoria requesting higher instruction at the Gallery School, and founded with Abrahams a ‘life club’ in 1882 so they could draw the nude figure. Awarded a number of prizes, McCubbin’s student work from this period is exemplified in Home again 1884 (National Gallery of Victoria), a sentimental Victorian narrative tableau filled with meticulously rendered domestic detail. During this time McCubbin also produced sketches for magazines and newspapers, an activity that informed much of his early painting.

Moving from city scenes and nostalgic views of his bakery, McCubbin began to work en plein air in the bushland near Melbourne. With Abrahams and Tom Roberts, who had just returned from a four-year trip to Europe, he established the Box Hill artists’ camp in the suburban bush near Melbourne in 1885, painting Gathering Mistletoe 1886 (private collection) and Lost 1886 (National Gallery of Victoria) the following year, which combine a narrative format with an emerging sense of localised light and colour.

In 1886 McCubbin was appointed drawing master at the National Gallery School, a post that he retained until his death. His pleasure at receiving this appointment is reflected in a three-quarter length Self-portrait 1886, in which he prominently proffers his artist’s palette to the viewer. Together with Roberts, Streeton, Conder and others, McCubbin staged the 9 by 5 impression exhibition in Melbourne in 1889, which consisted of impressions of bush and city life rapidly painted on cigar box lids. Scorned by conservative critics, this groundbreaking show reinforced the group’s claim that they were creating a new type of art in Australia.

During the 1890s McCubbin was inspired to create large-scale pioneering history paintings culminating in On the wallaby track 1896, the title deriving from a colloquial term used to describe those who lived constantly on the move, camping by the roadside as they travelled in search of work during a period of economic depression. Painted close to his home in Brighton, Victoria, using his family members as models, this monumental work represents a tribute to the rural labourers enduring poverty and hardship as the true pioneers of settlement. Embracing a nationalist message in its choice of a characteristically Australian subject, On the wallaby track adopts the academic naturalism of French plein-air painter Jules Bastien-Lepage and the new focus on everyday subjects by leading French Barbizon school artists Corot and Millet.

McCubbin was president of the Victorian Artists’ Society from 1893 to 1896 and moved to Mt Macedon in 1900, a subject which would feature in many of his later works, including Landscape c1914, which evokes the ‘grey brown gold gums and opalescent sky’ of the region he describes in a letter to Roberts in 1903. McCubbin held several solo exhibitions in Melbourne from 1904 to 1907 before travelling to France and England, where he encountered the paintings of J.M.W. Turner at the Tate Gallery and was captivated by their ‘tender visions of light and air’, an influence manifest in the higher key and looser handling of the paintings made after his return to Australia.

In his final years, McCubbin’s painting developed more intimacy of scale evidenced in The gardener c1910, in contrast to his earlier ambitious subject pictures. With its looser gestural brushwork animating the surface of the painting with inflections of light and colour, the work shows McCubbin at the peak of his late style.

The first book on McCubbin’s work was published in Melbourne in 1916, a year before his death. His first retrospective exhibition, marking the centenary of the artist’s birth, was held at the National Gallery of Victoria in 1955.

Other works by Frederick McCubbin