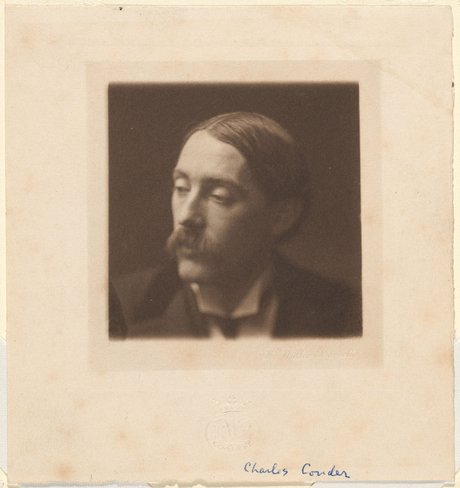 Charles Conder was one of the key founders of the Heidelberg school of Australian Impressionism with Tom Roberts, Frederick McCubbin and Arthur Streeton.

Sent to Australia in 1884 by his father to train as a surveyor, Conder worked for the Lands Department and as a lithographic apprentice for the Sydney Illustrated News, the graphic work of which helped him to develop an unparalleled eye for human incident. He attended Art Society School drawing classes with Julian Ashton and studied painting under AJ Daplyn, an adherent of plein-airism. Conder befriended Tom Roberts during the latter’s visit to Sydney in 1887, painting with him at Coogee during Easter 1888. Recently returned from London and the Royal Academy Schools, Roberts was inspired by James McNeill Whistler and colour experiments, influencing Conder to employ a suggestive rather than literal approach to painting.

Conder’s new mastery of form and brushwork is apparent in Departure of the Orient – Circular Quay 1888. With its silvery-grey tonality, contrasted with touches of brilliant colour, it reflects the influence of Whistler, an impressionist approach to atmosphere, and the principles of aesthetic painting. Conder’s interest in Japanese art, with its large, empty spaces, is also paramount. Displayed in the 1888 Art Society exhibition, the work provides a distinct view of Sydney as a rapidly urbanising city on the cusp of modernity and nationhood.

Following the successful sale of this painting to the Art Gallery of New South Wales, Conder departed for Melbourne in October 1888 to work with Roberts. He joined the Victorian Artists Society, exhibiting four recent works including Sydney paintings such as Coogee Bay 1888 (now in the National Gallery of Victoria) with a spectacular new beach study he made soon after arriving in Melbourne – A holiday at Mentone 1888 (now in the Art Gallery of South Australia).

In 1889 Conder became part of the semi-permanent artist camp at the old Mount Eagle Homestead at Heidelberg with Roberts and Streeton, painting outdoors in all seasons. The group gave each other affectionate nicknames: Conder’s was abbreviated to ‘K’ or ‘Kay’, a play on the first letter of his surname, evoking the almost feminine grace of his elusively vague, poetic persona.

Produced during this period,On the River Yarra, near Heidelberg, Victoria c1890, was painted at the request of Walter Withers, who was for a period working with the group, evoking the collegiate spirit of Australian Impressionism. Its fresh, rapid execution (which even contains evidence of the artist’s fingerprints, displaying haste to record the effect of the motif as quickly as possible) is a supreme example of the philosophy of plein-airism and the Corot-esque notion that submission by the artist to the monumental moments of nature had its most ideal expression through the oil sketch.

Together with Roberts, Streeton and McCubbin, Conder was one of the principal contributors to The 9 by 5 impression exhibition of August 1889, which consisted of impressions of bush and city life rapidly painted on cigar box lids, epitomised in Conder’s lively portrait sketch of Roberts, An Impressionist (Tom Roberts) c1889. The playful zigzagged background – based on a surveyor’s chain, referring to Roberts’ early employment in Sydney – prefigures Conder’s decorative style, characteristic of his later European work, as well as echoing the cover of the exhibition catalogue which he designed.

In 1890 Conder left Australia for Europe, moving between France and England for the remainder of his life. In Paris he became a legendary figure of the fin de siècle, mixing with leading artists and writers of the day, including Henri de Toulouse-Lautrec, Oscar Wilde and Aubrey Beardsley. He set up a studio in Montmartre and studied at the Académie Julian and Atelier Cormon. Attracted by the bohemian atmosphere of nearby cafes and cabarets such as the Moulin Rouge, he frequented them with Toulouse-Lautrec.

Struck by Claude Monet’s exhibition of haystack paintings, Conder travelled to Normandy in the spring to paint in the valley of the Seine, giving up a tonal palette in favour of pure colour. Falling ill in the winter of 1891, he convalesced in Mustapha, Algiers, writing to a friend, the English artist William Rothenstein: ‘…Here one feels quite in Australia again even the old remembered gum trees have been transplanted and summer reigns…’ The hot sands, Mustapha, Algiers 1891 was painted during this period, revealing Conder’s embrace of aestheticism and symbolism in its oblique view of subject matter in which the sandy beach is only distantly glimpsed as a tiny strip beneath the sky at the top of the canvas.

By the mid 1890s, Conder became involved with art nouveau, broadening the scope of his work to include book illustration and decorative painting on silk, from fans, panels, screens and ‘overdoors’ to silk dresses. The awakening c1895, a study for a fan design, and Béatrix et Calyste 1899, a lithograph based on a novel by French writer Honoré de Balzac, embody his flair for ornamental fantasies, revealing his love of literature peopled by courtesans, troubadours and poets in an imagined world of intrigue and love.

Although he acquired a London studio in 1896 and lived there from 1902, leading a fashionable social life, Conder was drawn to English coastal towns, enamoured by the elemental qualities of sea, sky and sand. Characterised by a vivacious, high-key simplicity, The sands, Newquay 1906 represents a return to plein-airism for Conder that recalls his earlier ebullient Australian beach scenes. He painted the work while convalescing from a stroke from which he never fully recovered; he died in 1909, just after his 40th birthday.

A major exhibition of Conder’s work was organised at the Anthony Hordern Gallery, Sydney in 1927, followed by a retrospective at Graves Art Gallery, Sheffield in 1967 and, more recently, at the Art Gallery of New South Wales in 2003. Conder’s work also featured in the Australian Impressionism exhibition at the National Gallery of Victoria in 2007 and Australia at the Royal Academy of Arts in London in 2013.

Other works by Charles Conder