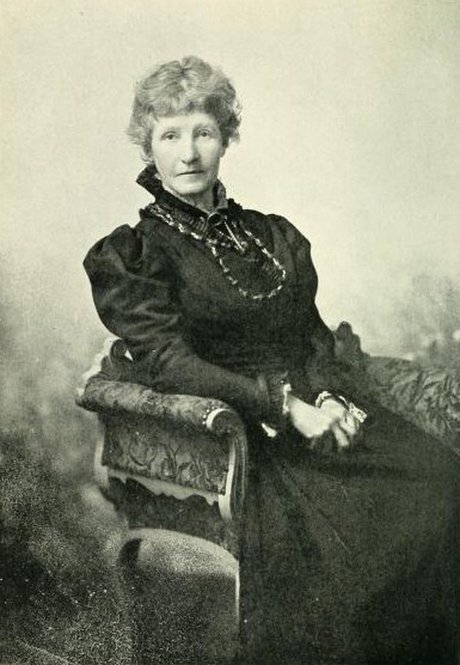 Helen Allingham (nee Paterson) studied at the Birmingham School of Design and from 1867 at the Royal Academy Schools in London. She worked as a magazine illustrator before her marriage in 1874 to the Irish poet William Allingham (an associate of the Pre-Raphaelites) when she took up watercolour seriously. In 1875 she was elected an associate of the Society of Painters in Water Colours and was immediately made a full member in 1890 when the bar on women holding full rank was lifted.

In 1881 the Allinghams moved to the village of Sandhills near Witley in Surrey, close to where the painter Myles Birket Foster – an important early influence – had earlier relocated from London. Here Allingham devoted herself to painting quaint cottages and their gardens, subject matter with which her name became indelibly associated.

Her works were phenomenally successful and attracted adulation from the press and public before reaching a wider audience through colour reproductions in books such as Happy England (1903) by Marcus Huish and The cottage homes of England (1909) by Stewart Dick.

The unspoilt character of the English countryside and its vernacular architecture were Allingham’s main concerns. The thatched cottages she painted were in fact steadily disappearing and it is probable that her paintings shared something of the Ruskinian spirit of the Society for the Protection of Ancient Buildings, with one of the founding members of which, Thomas Carlyle, she was a good friend.

Despite its firm basis in reality, Allingham’s art is one of subtle illusions and manipulation of reality. Her watercolours offered audiences in polluted and overcrowded cities an unashamedly sweet vision of pre-industrial rural life, where innocent little girls were dressed-up in old-fashioned smocks and sunbonnets. Even the lattice panes of cottage windows were ‘restored’ by the artist where they had never actually existed.

An unremitting exhibitor, Allingham completed 79 works for her one-woman show, On the Surrey border, at the Fine Art Society in 1889. Four watercolours were purchased there by the Art Gallery of New South Wales. The exhibition review in The Illustrated London News praised Allingham’s ‘delicate and attractive studies of cottage and lane life’, rhapsodising the unspoilt corner of south-east England that ‘has furnished her with ever-varying scenes – subjects which she has embellished in the true spirit of the artist’.

Allingham habitually painted outdoors and added the figures, usually professional models, in the studio. Unlike Birket Foster, with whom she is often associated, Allingham rejected bodycolour from her technique. Her method, which involved ‘obtaining effects by rubbing, scrubbing and scratching’, was described by Marcus Huish: ‘Flowers are carved out of a background… and left as white paper, all their drawing and modelling being achieved by a dextrous use of the knife and a wetted and rubbed surface… There are no badly pencilled outlines, and the blooms blend amongst themselves and grow naturally out of their foliage.’

Other works by Helen Allingham