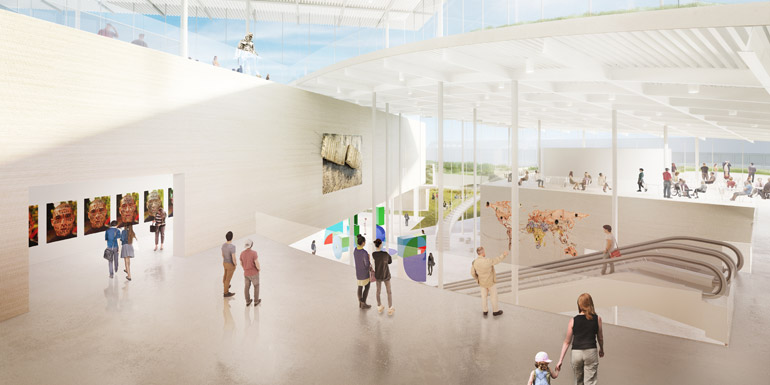 An ambitious capital campaign to raise $100 million in private funding to support a major expansion of the Art Gallery of New South Wales is close to reaching its target, with $96 million pledged to date.

Together with the NSW Government’s funding of $244 million, the philanthropic support for the Sydney Modern Project is believed to be Australia’s most significant public-private partnership in the arts.

The expansion will provide much-needed space to display more of the Gallery’s permanent collection and the best exhibitions from around the world, increasing visitation to more than two million people a year.

The new building, designed by Pritzker Prize-winning architects, SANAA, will be linked by a public Art Garden to the existing building, creating a vibrant new cultural destination and architectural landmark in Sydney.

Following on from the announcement of the capital campaign’s lead donors in 2017, the Gallery is delighted to recognise the Building Founders who have generously given $1 million gifts each to support construction of the new building.

Andrew Cameron AM, chair of the Art Gallery of NSW Foundation board and a member of the capital campaign committee, and his wife Cathy Cameron, a volunteer guide at the Gallery, were early supporters of the Sydney Modern Project.

‘This is a vital project for the arts in Sydney and one that cannot happen without private support. We are proud to make an investment in Sydney Modern, which will be transformative for the Art Gallery of NSW, especially its younger audiences,’ Mr Cameron said.

International donor Hamish Parker said the expansion project is ‘clearly a necessity not a luxury’.

‘On every visit, the Gallery is bursting with activity, with so much to do and so much to see. The Gallery’s unparalleled holdings of Australian art, both Western and Indigenous, need to be seen by the widest possible audience.

‘As an overseas visitor not living in Sydney, a project needs to be extra special for me to support it financially. Sydney Modern is such a project. The new building itself is a truly wonderful piece of elegant design, totally sympathetic to its historic surroundings,’ said Mr Parker, who is based in London.

Art Gallery of NSW director Michael Brand said the once-in-a-generation project can only reach its full potential with philanthropic support.

‘Our generous donors include many philanthropists who are well known for their support of the arts, locally and internationally. We are honoured that our Building Founders believe deeply in the importance of the Gallery’s expansion to Sydney, NSW and the nation, and have decided to support our vision in such a significant way.

‘Thanks to the continuing leadership and commitment of our donors, our capital campaign has almost reached its target. This unprecedented public-private partnership with the NSW Government in the cultural sector will change the face of the arts in our great harbour city,’ Dr Brand said.

The Building Founders join a generous community of donors led by Isaac Wakil AO and Susan Wakil AO, whose $20 million gift in June 2017 was the largest monetary donation in the institution’s 147-year history, along with gifts of $5 million and more from the Ainsworth family, the Lowy family, Kerr Neilson, Mark and Louise Nelson, and Gretel Packer.

New campaign donors at the $1 million level are invited to join the Yiribana Founders, who are supporting the prominent display of Aboriginal and Torres Strait Islander art in the new building. Members of the group, led by David Gonski AC, president of the Art Gallery of NSW Board of Trustees, and his wife Orli Wargon OAM, will be announced in coming months.

Read more about the Gallery’s expansion and capital campaign on the Sydney Modern Project website.