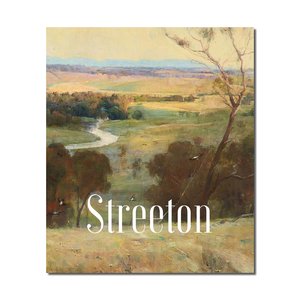 Australian artist Arthur Streeton (1867−1943) produced remarkable evocations of light and the landscape and he remains one of the most enduring and popular painters in Australian art. From his early twenties Streeton’s exceptional abilities as a painter were evident in works such as 'Still glides the stream, and shall for ever glide' 1890 collected by the Art Gallery of NSW the year he painted it at the age of 22. His skill saw him adapt his mark-making to his purpose as he set solid elements as rocks, land and structures against ephemeral smoke, clouds and rain showers. His sun-drenched impressionist landscapes from the 1880s, joyful depictions of Sydney beaches and harbour in the 1890s, and pastoral paintings from the 1920s and 30s continue to define an image of our unique environment for many Australians.

Streeton is the first major book on the artists since 1995. With essays by authors including Tim Bonyhady, Jane Clark and Roger Benjamin, as well as museum curators, the book features his much-loved Australian paintings as well as works from Streeton’s international career painting in Egypt, Venice, England, Italy and the battlefields of First World War France, covering his practice from 1885 to 1940.

Streeton explores the, at times, conflicted drives that underlie the artist’s work, particularly the tension between his youthful embrace of challenging new ideas in art and his later turning to an even earlier interest in the conventions of the academy. Streeton explores the artist’s return to Australia in the 1920s after two decades in London and considers the inclusions and exclusions from the nationalist narratives and conservative commentary which arose around Streeton’s practice, but which was not endorsed by Streeton himself.

A key focus is Streeton’s deep concern about the destruction of our forests and the degradation of our waterways, heralding our conservation and climate-change debates today. Streeton also explores the artist’s use of materials to depict the materiality of his environment − whether natural or built or both. His interest in landscape is far less idyllic than it may first appear as he depicts labour and industry (rail, roads, bridges, shipping) and marks the passage of time when painting new buildings, deforestation and transport developments in locations he had painted previously.

The book has been published by the Art Gallery of New South Wales with Thames & Hudson Australia and generously supported by the Dr Lee McCormick Edwards Charitable Foundation.