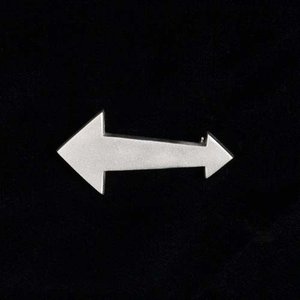 Brett Whiteley is one of Australia’s greatest artists, whose work encompasses painting, sculpture and the graphic arts. His visual language was often an accumulation of myriad sources and influences, with certain repeated motifs symbolising states of mind. The doubleheaded arrow was one such motif, reappearing throughout Whiteley’s oeuvre, including in his monumental 18-panel painting, Alchemy 1972–73. In Alchemy, the arrow seems to indicate the composition can be read in either direction; between birth at one end and death at the other. Representing symmetric opposition as much as the cycle of life, it also stands as a symbol of equivalence. In Whiteley’s 1968 portrait of Vincent van Gogh, a prominent double arrow also hangs suspended between the words ‘Art’ and ‘Life’.