Daniel Browning leads the other team

The deadly mix of fun, facts, chat and laughs is now a television series

Faboriginal is an Indigenous art quiz show hosted by the hilarious and sexy Steven Oliver (actor, writer, comedian and series co-creator) and adjudicated by the Art Gallery of NSW’s curator of Aboriginal and Torres Strait Islander art, Coby Edgar (aka the Taboriginal).

The quiz takes it cues from the art and artists in the Gallery’s Aboriginal and Torres Strait Islander art collection.

The artworks by episode

The series was filmed in August 2019 at the Art Gallery of NSW in front of a live audience, with our Yiribana Gallery of Aboriginal and Torres Strait Islander art temporarily transformed into a TV recording studio.

Click on one of the small images below for a look at how it all came to be. 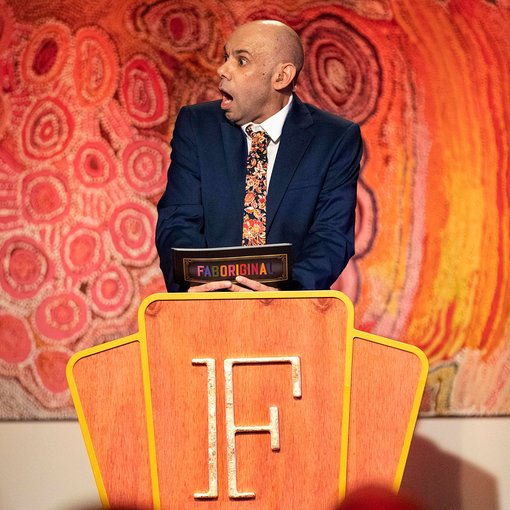 2019
Steven Oliver during filming of the TV series, in front of Jakayu Biljabu’s 2008 painting Minyi Puru from the Art Gallery of NSW collection.

2019
Coby Edgar, as the Taboriginal, on the set with Daniel Browning, Shari Sebbens and Christine Anu.

2019
The view from the Taboriginal’s chair.

2019
Coby Edgar as the Taboriginal, in front of Ian Abdulla’s 1995 painting Swimming before school from the Art Gallery of NSW’s collection

2019
Bjorn Stewart, Elaine Crombie, Steven Oliver, Daniel Browning and Ian Zaro are filmed in front of a live audience at the Gallery.

2019
A break in filming, which took place over four days in August.

2019
The autocue operator at work. The episodes are a mix of scripted questions and improvisation.

2019
The Yirbana Gallery was transformed with large amounts of TV gear bumped in for the shoot.

2019
Waiting for action… cameras take up the space usually reserved solely for art.

2019
Coby Edgar and Elaine Crombie in hair and make up before the shoot.

2015
Brendon Boney and Nakkiah Lui as contestants in Koori kwiz.

Images at top of page include Jakayu Biljabu’s 2008 painting Minyi Puru, Art Gallery of New South Wales © Jakayu Biljabu. Licensed by Copyright Agency. For information about artworks by episode, click on each episode.

A co-production with NITV, Noble Savage Pictures and the Art Gallery of NSW, Faboriginal will be televised weekly from 13 February 2020 on NITV then available through SBS On Demand