Who was JF Archibald?

JF Archibald (1856-1919) was a journalist and founder of the Bulletin magazine, who also served as a trustee of the Art Gallery of NSW.

He is the man behind one of Australia’s oldest and best known art prizes for portraiture. Yet Archibald had no desire to become famous and, during his lifetime, shunned publicity and remained evasive and enigmatic. A portrait of him, commissioned by the Art Gallery of NSW trustees, was made after his death and remains as one of the pictorial records of a man who avoided having his photograph taken.

Archibald was born in Victoria and christened with the name John Feltham. When he was 15, he started his career in journalism on a country newspaper in Warrnambool, Victoria. His passion for newspapers led him to Melbourne, searching for work in ‘the big smoke’. He lived a bohemian life, frequenting Melbourne’s city boarding houses, streets, theatres and cafes – a life he imagined to be quite European, which led him to change his name to Jules François and later to leave money in his will for a large fountain to be built in the middle of Sydney’s Hyde Park to commemorate the association of France and Australia in World War I.

Realising the power of print, in 1880 he and a friend founded the Bulletin magazine, a radical journal for its time, addressing issues of nationhood, culture and identity. This journal was influential in shaping opinions and raising issues in the public’s consciousness. He also employed the best young artists to be its illustrators.

Archibald’s interest in art led him in his later years to serve as a trustee for the Art Gallery of NSW, keen to promote the work of younger artists and writers. In 1900, he commissioned Melbourne portrait artist John Longstaff to paint a portrait of poet Henry Lawson for 50 guineas. Apparently he was so pleased with this portrait that he left money in his will for an annual portrait prize, which was first awarded in 1921. His primary aim was to foster portraiture, as well as support artists and perpetuate the memory of great Australians. 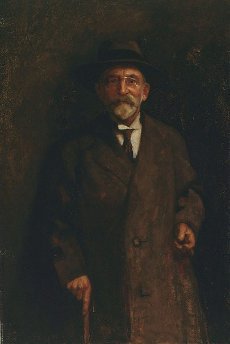