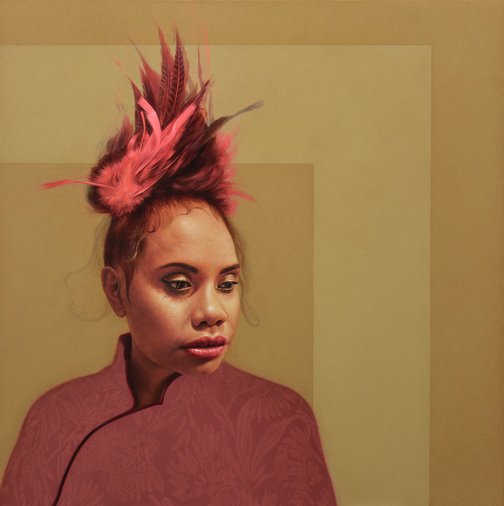 Born in Sydney in 1959, Nick Stathopoulos is a self-taught artist known for his hyper-realistic style. Now a six-time Archibald Prize finalist, he won the 2016 People’s Choice with a portrait of Sudanese refugee lawyer Deng Adut. This year, his subject is Papua New Guinea-born, Australian-based singer-songwriter Ngaire Laun Joseph, who is known by the stage name Ngaiire.

The Peggy Glanville-Hicks Composers’ House where Ngaire was the 2019 composer-in-residence is just a couple of doors away from Stathopoulos’ studio. He approached Ngaire after seeing her perform live. ‘What an astonishingly powerful, emotive voice! She was wearing this elaborate headdress and make-up and I was captivated and started painting her in my head. After the performance, she happily consented to a portrait.

‘I often paint large works, but in this instance Ngaire’s unassuming character dictated a more modest scale. Somehow a larger-than-life portrait was inappropriate, despite her flamboyant and glamorous on-stage persona, and I sought to capture these opposing qualities.’