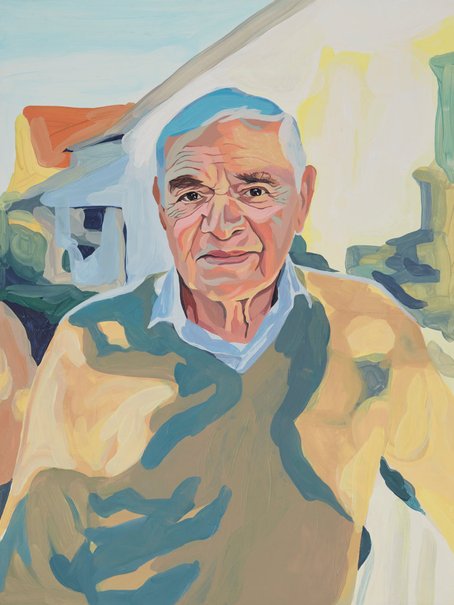 Thea Anamara Perkins has painted her grandfather, Charles Madden. She says: ‘I painted my pop as I wanted to pay homage to him as a prominent and respected Gadigal elder, known around Redfern as Chicka. He’s given a lifetime of service to local grassroots organisations, including the Aboriginal Medical Service, Metropolitan Local Aboriginal Land Council and his beloved Redfern All Blacks. He also worked on the railways in Sydney for over 50 years. He has the gentleness that comes with great strength and integrity.

‘I initially painted him in the suit that he wears to give Welcomes to Country, which is very dignified. However, I realised I wanted to show a more private side, and opted for a more casual setting. I hope this painting conveys how I feel about my grandfather and how our family is – to quote musician Kev Carmody – “blessed with the gentlest of men”.’

Perkins was born in Sydney in 1992 and is an Arrernte and Kalkadoon woman. This is her second year as an Archibald Prize finalist following her 2019 portrait of fellow artist Christian Thompson.