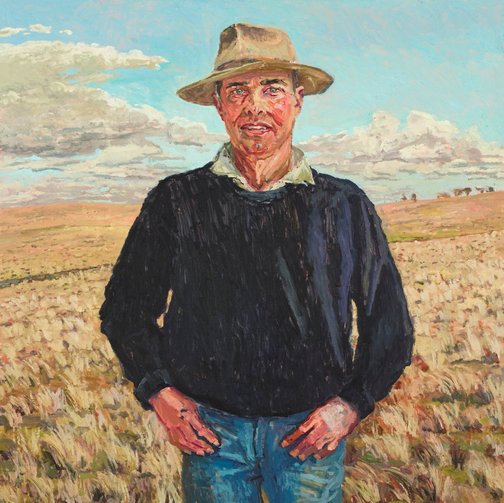 Lucy Culliton and farmer Charlie Maslin both live in the Monaro in southern NSW. Culliton is enthralled by Maslin’s approach to sustainable, regenerative land management, which has transformed his property over the years.

‘Angus cattle and merino sheep are rotationally grazed, giving grasses time to recover. Grass cover is dense, keeping moisture in the soil, so when it rains there’s little run off, with more moisture to feed the plants,’ says Culliton. ‘Charlie has planted around 50,000 trees, creating shelter for stock, habitat for birds, stopping erosion, and making carbon.’

For this Archibald portrait, Culliton had three sittings with Maslin. ‘Charlie would ride his push bike over, so we could work in the comfort of my studio in the middle of winter. I put in the grasses around Charlie later, to place him in his landscape.’

Culliton also has a painting of Maslin’s farm in this year’s Wynne Prize. It is the sixth time in the Archibald Prize and the sixth in the Wynne for the artist, who was born in Sydney in 1966 and studied at the National Art School.