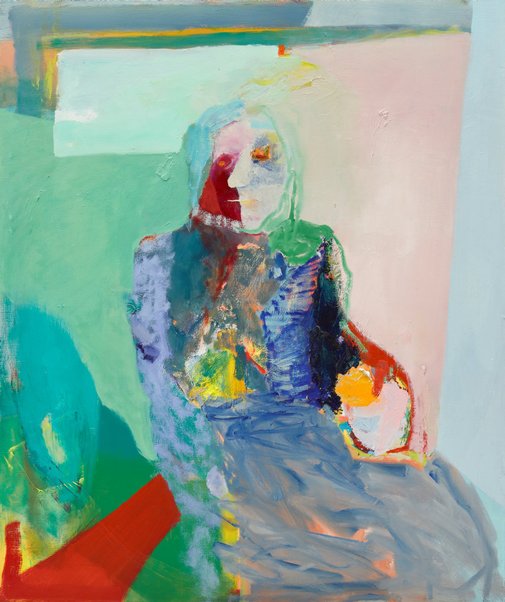 The late Madonna Staunton OAM, who died in December 2019, was an artist and poet whose practice spanned five decades and included writing, collage, assemblage and painting. Karen Black says: ‘I’d wanted to paint Madonna since 2014 after seeing her paintings at QAGOMA in Brisbane. I felt she’d been overlooked as one of our great women artists and wanted to put her in the spotlight. When I discovered she was the same age as my mother and also had dementia, it gave me a more personal reason to meet her. I visited her in the nursing home and was inspired to see her still working on various paintings. She was still outspoken, yet I could see a certain introspect in her manner, especially her eyes.

‘She sat on her bed talking, so I situated the painting in her room. When I mixed the paint on the canvas, a blob of paint hung over her eye, giving the portrait that feeling of introspection I’d recognised. I used shapes that reference her assemblages and collages and painted the work in the pale colours she was wearing on the day, which reminded me of time fading away.’

Black was born in Brisbane in 1961. She has a Bachelor of Fine Art from Griffith University and is a lecturer at the National Art School in Sydney. This is her first time in the Archibald Prize.