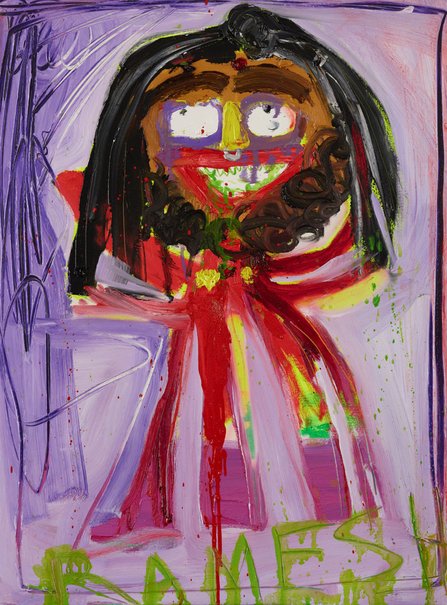 In this self-portrait Ramesh Mario Nithiyendran has depicted himself imaginatively, as a polymorphic figure. ‘I referenced graffiti and South Asian rock art to develop a language of self-representation. I’ve also studied Hindu mythological figures to create this portrait,’ he says.

‘The work is loosely based on a ceramic sculpture I made in 2015. This work, called Kala, is in the collection of the Shepparton Art Museum in Victoria. But the painting also refers to all my ceramic works to date.’

‘Self-portraiture and self-representation is a consistent theme in my practice. The pronounced signature, RAMESH, gestures towards ideas of the artist as a brand, graffiti and ways painters have signed their work. It also reflects an observation I have made that interpretations of my works are often conflated with perceptions of my character and physicality.’

Born in Sri Lanka in 1988, Nithiyendran came to Australia in 1989 and now lives and works in Sydney. He has presented solo exhibitions at the National Gallery of Australia and the Ian Potter Museum of Art. He was a finalist in last year’s Sulman Prize, in which he is also represented this year.