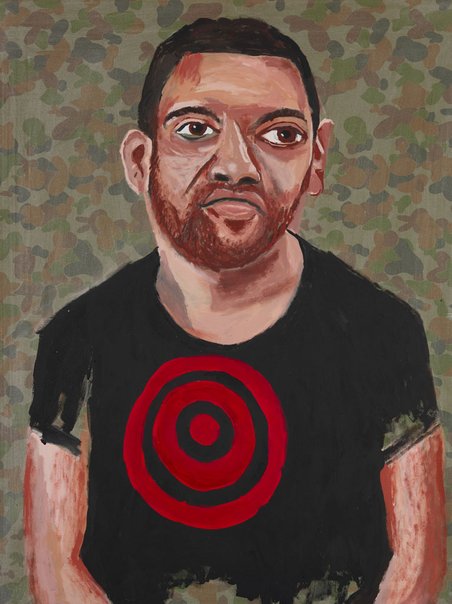 ‘Tony Albert is a friend and an inspiration and I’m very proud to be in the Archibald Prize as one Aboriginal artist painting another. I’ve used army surplus camouflage material as the background to represent Tony as a soldier, fighting for Aboriginal Australia – art is his weapon and he uses his practice to highlight Indigenous stories that otherwise remain hidden,’ says Vincent Namatjira.

‘We first met when we worked on Weapons for the soldier, a major collaborative exhibition in 2018. Tony knew I was researching the often-overlooked contribution of Indigenous Australian soldiers and he shared the story of his grandfather’s experiences during World War II, as well as his own personal experience training with NORFORCE, an infantry regiment of the Australian Army Reserve. Tony took a photographic portrait of me for Weapons for the soldier. Ever since then I have wanted to “return the favour” and paint his portrait.’

‘I wanted to capture Tony’s openness, but also his strength and defiance. The red target on his t-shirt refers to his powerful arts project We can be heroes.

Born in Alice Springs in 1983, Namatjira is a Western Arrernte man. He lives in the Indulkana community in the Anangu Pitjantjatjara Yankunytjatjara (APY) lands in South Australia and works at Iwantja Arts. This is his third time in the Archibald Prize.