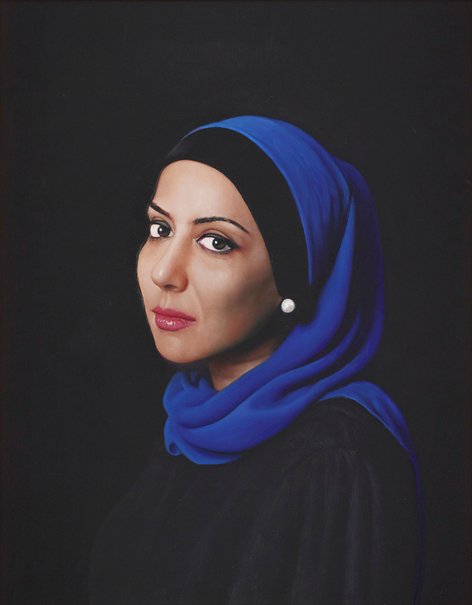 Angus McDonald’s subject is Mariam Veiszadeh, a lawyer, writer and social commentator. She and her family fled Afghanistan in 1984 during the Soviet–Afghan War and arrived in Australia several years later when she was seven.

‘Mariam has been a fearless advocate for inclusiveness, championing the rights of minority groups in an endeavour to normalise “difference”,’ says McDonald. ‘She has been recognised by numerous organisations, but her rallying against bigotry has also seen her subjected to extreme online bullying and violent hate speech. In my mind, she is a hero for working tirelessly to make Australia a stronger, more tolerant and united society.’

‘I asked Mariam to pose like Vermeer’s Girl with a pearl earring (c1665). I like the juxtaposition of an iconic Western European painting with a powerful, contemporary Muslim woman. I wanted to challenge these old-world distinctions of race and religion because they do not serve us well.’

Born in Lennox Head, New South Wales in 1961, McDonald studied at the Julian Ashton Art School in Sydney and the Florence Academy in Italy. In 2017, he began a film project to advocate for a more humanitarian approach to asylum seekers. His short film Manus been shortlisted for several festivals. This is his fifth time in the Archibald Prize.