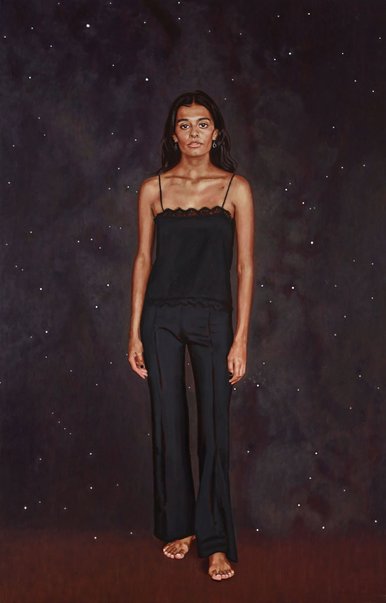 Madeleine Madden is an actor and activist who, in 2010, at the age of 13, spoke on behalf of the GenerationOne campaign, calling for a better future for Indigenous Australians.

‘As a non-Indigenous person, I will always feel a special awe and reverence for Maddy, who was the first teenager to deliver an address to the nation,’ says Mathew Lynn.

‘I first met her as a feisty, tiny tot while painting two Archibald Prize portraits of her mother Hetti Perkins, and I fondly remember her giving me quite a hard time for being a whitefulla! Now, as a young actor, she has made a strong impression on me in roles such as Crystal Swan in Mystery Road, directed by her aunty Rachel Perkins.’

‘The crow is a reference to her grandfather Charles Perkins. It is also a response to the greatness of Bruce Pascoe’s book Dark emu. Those who know the night sky will be aware that the emu’s head is sitting right behind Maddy’s heart. I wanted to embody something in her that is inevitable and unerasable, moving slowly towards us and written forever in the stars.’

This is Lynn’s 16th time as an Archibald Prize finalist. He was highly commended in 1997 and 1998, and has won the People’s Choice award and Packing Room Prize.