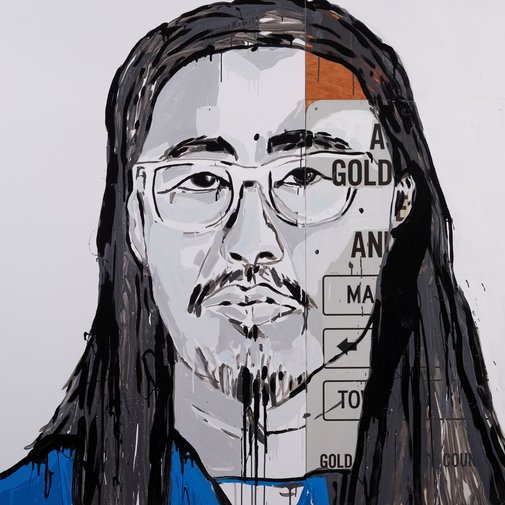 Jason Phu has been an Archibald Prize finalist twice. He won the Sulman Prize in 2015 and is a Sulman finalist again this year.

‘Jason is a friend who I got to know better when we stayed together in Hong Kong at last year’s Art Fair. Over summer he moved into the studio two floors above mine for about a month and made one of the most amazing painting shows I have seen anywhere in the last few years. Some artists just have it,’ says Jasper Knight.

For Phu’s portrait, Knight referenced one he did of curator Bill Wright, which hung in the 2010 Archibald Prize, where he had stripped back the background and left the assemblage visible in the face. In this work, he has painted out most of the sign (which says Gold Coast City Council – Main Beach Gold Coast).

‘Regardless of making the Archibald finals, I felt like I had already won, as Jason’s mother asked if she could buy it, so I gave it to her as a gift. However, Jason insisted on a swap, so everyone was a winner,’ says Knight.

Born in Sydney in 1978, Knight has been in the Archibald Prize on six previous occasions.