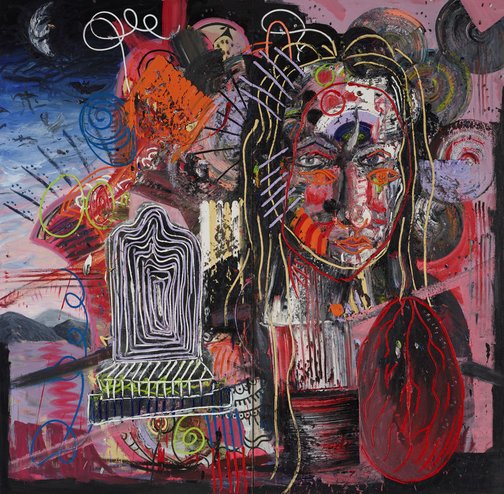 ‘Amongst the backdrop of an art industry that can be riddled with drama, negativity and bitterness, someone will come along with care and compassion for artists. Alexie Glass-Kantor is such a person,’ says David Griggs.

‘I will not go into her achievements here as Wikipedia lists them all for you. I will tell you a story of a young curator who wrote about my work at the very start of my career. Twenty years later this young curator is now the executive director of Artspace in Sydney. Last year, during my one-year studio residency there, I became ill and had to take two months off. When I returned, Alexie and all the staff stepped up to make sure I was okay and to keep me working in a beautiful, positive environment. The level of care was unsurpassed.’

‘I wanted to paint Alexie as a thank you for looking out for me during a hard time. In turn, she allowed me into her own internal world in all its glory and pain. The painting you see is a mood, a free-flowing creative exchange between two humans, two friends.’

This is Griggs’ eighth time in the Archibald Prize. He is also a finalist in this year’s Sulman Prize.