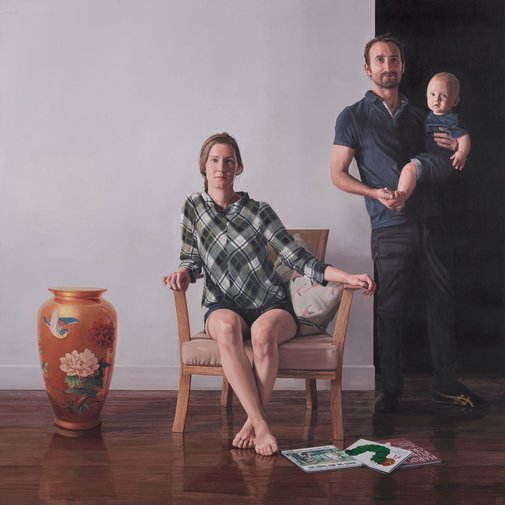 Jonathan Dalton’s subject is artist Sally Anderson. ‘I wanted to paint Sally because I love her work. Her paintings have an astonishing lyrical potency expressed in such a beautiful gestural language that it seems to bypass thought and plug directly into memory,’ says Dalton.

‘Sally is a fairly new parent. In this portrait, I wanted her to be front and centre as an artist but to acknowledge how difficult that can be when there is so much pressure to be a mother first and an artist second. Her partner, Guy Maestri, is also an incredible artist but by resigning him to the shadowy background with baby on hip – a role all too frequently assigned to the mother – I hoped to underscore and contrast that historical sentiment of women as mere set dressing.’

‘The three books are a nod to the life of the artist, always hungry for new ideas, living on the wilder side of things, and bringing it all to life through art, as in the story Harold and the purple crayon.’

Born in Dublin, Ireland in 1977, Dalton migrated to Australia just over six years ago from Spain and now lives and works in Sydney. This is his third consecutive year in the Archibald Prize.