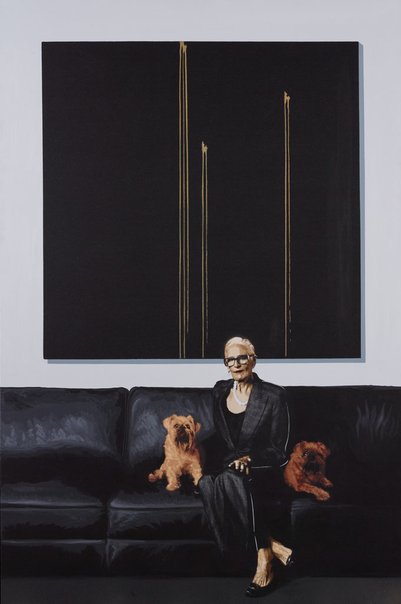 Luke Cornish’s subject is businesswoman and media commentator Sue Cato. She heads her own company, Cato Counsel, and is a partner of cato & clegg. She is also a board member of Carriageworks in Sydney and a member of Sydney Contemporary’s advisory council.

‘To be honest, I really just wanted to paint her dogs, Callie and Comet. They’re the biggest bundles of love and you can’t help but be happy in their presence. But to align with the terms and conditions of the Archibald Prize I needed to add someone distinguished in the arts,’ says Cornish. ‘Sue is a generous arts patron while being on the board of numerous institutions, as well as an extremely successful businesswoman. She embodies female empowerment. Total boss.’

The sitting was done at Cato’s Redfern home. The painting behind her is by Scottish abstract artist Callum Innes. ‘Initially there was a painting by Ben Quilty [an AGNSW trustee] hanging there, but we decided that might be a conflict of interest!’ says Cornish.

Born in Canberra in 1979 and now based in Sydney, Cornish (also known as ELK) was the first street artist to become an Archibald Prize finalist, in 2012. He won the People’s Choice award at the 2017 Salon des Refusés and was a finalist in the 2013 Sulman Prize.