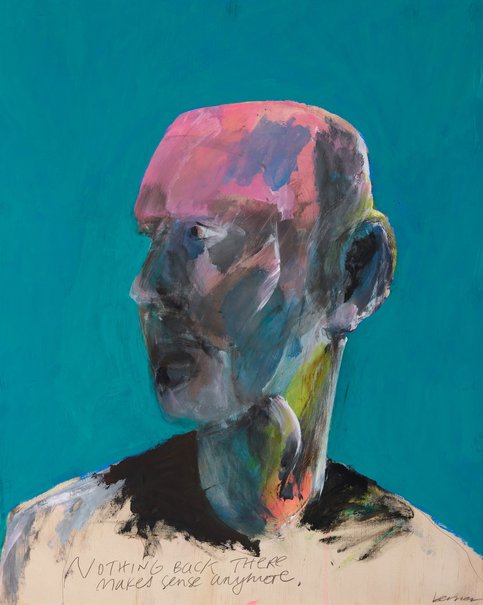 Peter Berner is a graduate of the National Art School, where he majored in painting. He is also a well-known stand-up comedian. He has hosted and written television programs, co-hosted radio shows, and works as a corporate entertainer, cartoonist and artist. This is his first time in the Archibald Prize.

‘A self-portrait allows me to sidestep the awkwardness of having a sitter who secretly feels the painting sucks but doesn’t want to hurt the artist’s feelings by saying so. I’ve hurt my own feelings many times, so I’m used to it,’ he says.

‘Also, I have spent a long time critically evaluating the person I see in the mirror each day, and I think this work speaks to that ongoing interrogation. It may also reflect the broader, current conversation asking men to examine their history and place honestly and critically. This would explain my anxious, unsettled expression.’

Berner painted directly onto unprimed plywood. ‘I made the frame, which reveals some highly suspect carpentry skills,’ he says. ‘I wanted the piece to appear raw, immediate and “unfinished”.’