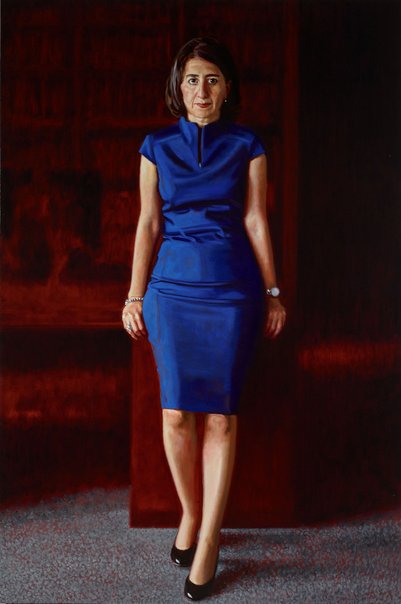 Mathew Lynn’s portrait of New South Wales Premier Gladys Berejiklian represents his 15th time as an Archibald finalist. He was highly commended and won the People’s Choice award in 1997, and he won the Packing Room Prize in 2013.

‘I didn’t have any particular thing I wanted to say about Gladys, in fact I was after the opposite. If anything, I wanted to suggest the unknowable and enigmatic, to convey that sense that we are unable to work out exactly what she is thinking. It was perhaps more about working intuitively and succinctly with each other, reflecting her day-to-day existence,’ says Lynn, who lives and works between Sydney and the Blue Mountains.

‘I wanted to create a kind of person/body space that is open-ended and capable of holding each viewer’s own thoughts, sensations or personal knowledge of Gladys,’ he adds.

In terms of composition, Lynn says he felt ‘compelled to create a sense that while she seems located in a certain space, she is simultaneously rising out of that into a kind of universal space. This is probably why I left the background more like an indication, something ephemeral, whilst making her more distinct. As it turned out, this is a very natural and attentive working pose for her, which combines contemplation and action.’