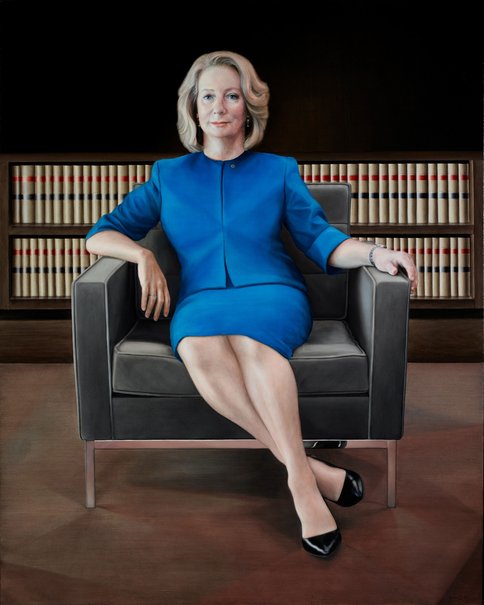 An organisation of women working on an initiative called First 100 Years approached Yvonne East and asked her to produce a portrait to commemorate the centenary of women being allowed to practise law and stand for parliament in New South Wales (Women’s Legal Status Act 1918).

‘The centenary initiative facilitated my meeting with the Honourable Chief Justice Susan Kiefel AC. The sitting was conducted in her chambers at the High Court of Australia,’ says East.

‘My hope was to capture the commanding and graceful presence of the Chief Justice (and her love of stylish shoes). Her incredible intellect is represented by the books behind her. There are 100 books: one for each of the 100 years being commemorated. Their spines are blank to represent the anonymity of the many women who have worked tirelessly to achieve their goals. This portrait represents the strength and honour of women in powerful positions, combined with femininity and order,’ says East.

East was born in regional South Australia, and lived and worked there until 2014 when she moved to Sydney with her eight-year-old son to complete a Masters of Fine Art at UNSW Art and Design. This is her first time in the Archibald Prize.