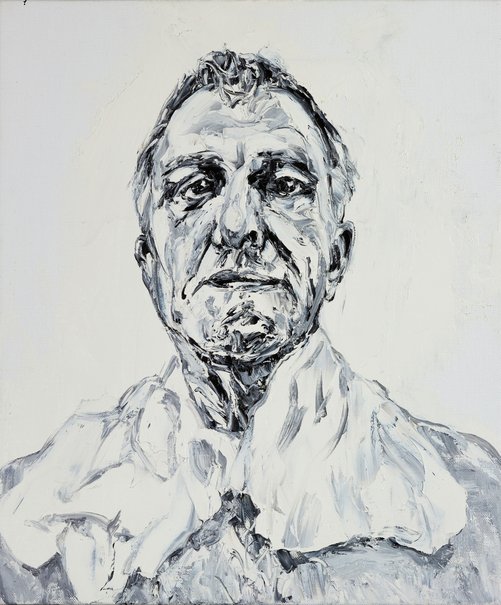 In October 2017, Nicholas Harding was diagnosed with cancer at the base of his tongue. With a good prognosis, the Sydney-based artist commenced seven weeks of treatment at Lifehouse.

‘I kept a visual journal and, when I was able, I drew what was happening during the process. After 35 sessions of radiation and seven doses of chemotherapy, my treatment finished on day 49,’ says Harding.

‘One of the compounding side effects of the radiation is the burning of the skin, so when my neck was blistered and bleeding it would be treated with sorbolene, Flamazine cream and ice-cold wet bandage wraps. On my last day of treatment, I took a selfie on my iPhone during one of these regular sorbolene soaks and later did a drawing from it, which I used for this self-portrait,’ says Harding, who is currently cancer-free.

Born in London in 1956, Harding moved to Australia in 1965. A self-taught artist, he has been an Archibald finalist on 17 previous occasions, winning the prize in 2001 and the People’s Choice award in 2005. He has also been finalist in the Wynne and Sulman several times. Known for his oil paintings, he initially painted this portrait using coloured oils but felt it wasn’t right. ‘So, I did another, taking photos of the painting in progress,’ he says. ‘This self-portrait came from one of those painting-in-progress images. Once the colour was removed, it achieved the stark quality I was after.’