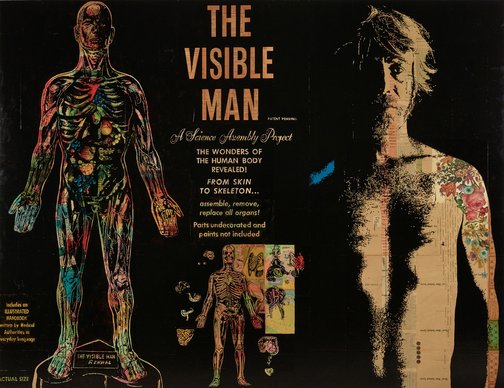 James Powditch describes this self-portrait as being ‘honest and raw, about aging and facing up to the reality of who I am as opposed to what I project’.

The Visible Man is an anatomy kit that Powditch remembers from childhood. Behind the figure are references to his youthful fascinations: movie stars, maps of exotic places, pictures from old art books.

‘Things behind the portrait of me include flowers – rose (love), daffodil (narcissism), St John’s wort (depression) – and chapter headings from The anatomy of melancholy, by Robert Burton, one of the earliest texts that looks at depression clinically and philosophically. There are also things that represent ways of creating order out of chaos: dates, calendars, statistics and astrological books,’ he says.

Powditch was born in Sydney in 1966. This is his fifth time in the Archibald Prize. He has also been a six-time Sulman finalist and this year is his ninth time as a Wynne finalist. Summing up this painting, he offers a quote from Joseph Heller’s novel Catch 22: ‘It was easy to read the message in his entrails. Man was matter, that was Snowden’s secret. Drop him out of a window and he’ll fall. Set fire to him and he’ll burn. Bury him and he’ll rot, like other kinds of garbage. The spirit gone, man is garbage. That was Snowden’s secret. Ripeness was all…’