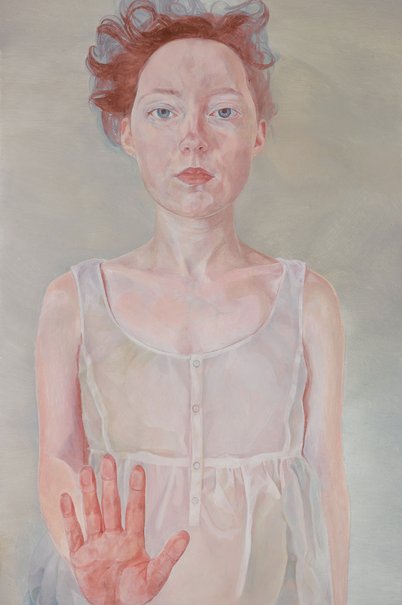 ‘The hand, which reaches out from an illusion of space to touch the painted support, serves as a reminder that the entire painting is, in fact, a surface. Particles of pigment suspended in oil have been pushed to and fro on this surface by my own actual hand. As such, touch is a quietly pervasive presence within the painting.’ says Natasha Walsh of her work in this year’s Archibald. ‘These particles react in a kind of alchemy to my mark-making and use of the copper support to produce a temporal illusion of flesh and space.

‘There is a point of separation between everyone. We are all trapped within a kind of glass box, seeing everything from our own perspective. The only mediator is language, art being one of its forms, which serves as an imperfect point of contact between two minds. Literally suspended in a prism of observed time, the gesture made by my representation illustrates my attempt to speak through my work directly to the viewer, from within my own glass box. Trapped within the non-existent space of the painting, however, this yearning to touch is impossible to fulfil.’

Walsh was born in Sydney in 1994. This is her third time in the Archibald Prize.