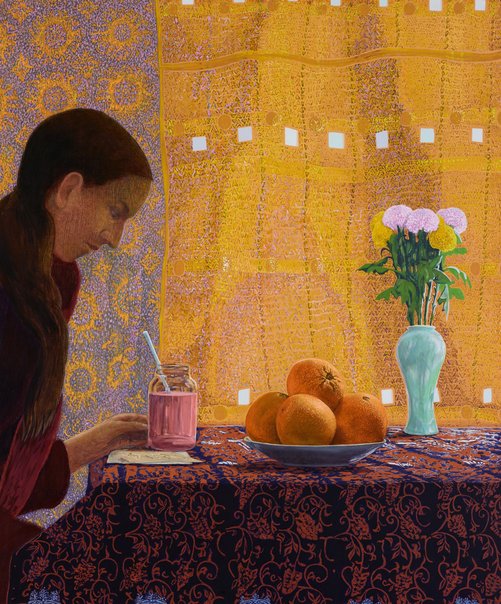 Title
The letter – I really wanted to paint Germaine Greer, but she said 'no' (self-portrait)
Medium
oil on board
Dimensions
111.5 x 93.5 cm
Further information

This self-portrait represents Stephanie Monteith’s first time in the Archibald Prize and she is also a finalist in this year’s Wynne Prize. Although she is not a specialist portrait painter, she enjoys painting people.

‘For some time, I had been interested in painting a portrait of Professor Germaine Greer, whom I admire for many reasons,’ says the Brisbane-born artist, who is now based in Loftus, New South Wales. ‘I made some requests and it became clear that it was unlikely to happen. And so, among other things, this painting is a metaphor for that stereotypical Archibald experience – the search for a desirable sitter.’

‘Initially I began the painting in the manner of a still life. The composition included a skeleton, but then I decided to include myself instead. The composition became a narrative about my communications with a proposed Archibald subject,’ says Monteith.

‘I didn’t want to paint myself for the Archibald but I was a convenient, available sitter. I prefer to work directly from life rather than using photographs, and the time needed for this can be difficult for other people. To paint myself in profile like this required an arrangement of mirrors reflecting one another.’