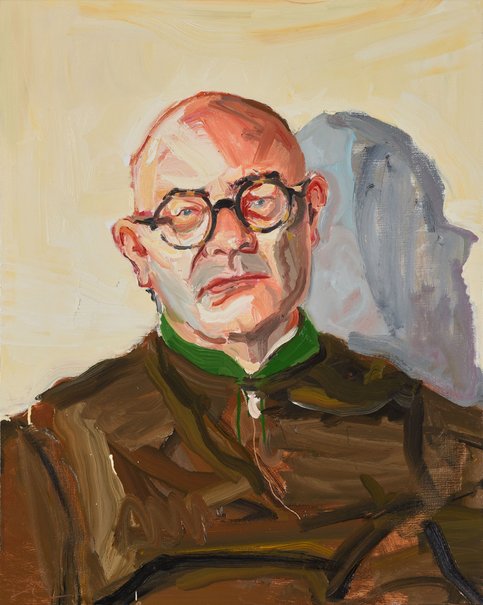 Michael Reid is a veteran art dealer. He has galleries in Sydney and Berlin, as well as in Murrurundi in the Upper Hunter region of NSW, where he presents contemporary Australian art and international art, including contemporary art by Aboriginal and Torres Strait Islander artists and from the Oceanic region.

‘I chose to paint Michael because he is well known in the art world and visually, he looks interesting,’ says Robert Malherbe. ‘He is also my new Sydney and Berlin art dealer, and I wanted to get to know him on a deeper, more personal level. Portrait painting achieves that. It creates a space where two people are surprisingly honest with each other.’

Born in Mauritius in 1965, Malherbe immigrated to Australia in 1971. A self-taught artist, he lives in Blackheath and has a studio in Darlinghurst. This year marks his third time in the Archibald Prize and his seventh as a Wynne finalist.

This portrait was painted at his studio in one sitting. ‘Michael arrived at 10.30am wearing his Bavarian hunter’s jacket, and sat down on a chair in front of me. While painting him our conversation veered across many topics from art-world gossip to car driving,’ says Malherbe. ‘By 1pm we were finished. I think he liked the final result and took a photograph to show his family.’