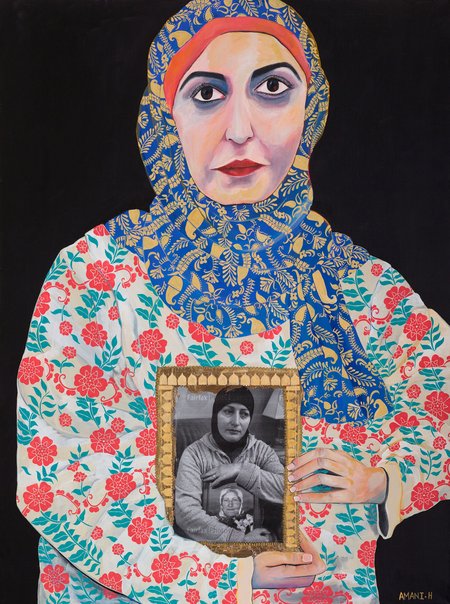 ‘When my mum was murdered in her home by my abusive father on 30 March 2015, some media outlets circulated a Fairfax photo taken in 2006 while my mum was grieving the death of her own mother, who was killed in an Israeli airstrike while fleeing the southern villages of Lebanon,’ says Haydar.

‘I incorporated the photo, which I printed straight off the internet (you have to pay for a proper print) as a way of reclaiming my story from the headlines. By painting a self-portrait, I was able to reinstate its personal significance to me.

‘I also saw it as an opportunity to challenge assumptions that women victims of crime are helpless, weak or subservient. I have used vibrant colour to convey a sense of hope, while the repetition of patterns echoes the repetition of trauma in my life, but also draws on the type of art found in mosques, which for me symbolises faith, survival and regrowth,’ says Haydar.

Born in Sydney in 1988, Haydar is a lawyer by profession. This is her first time in the Archibald Prize.