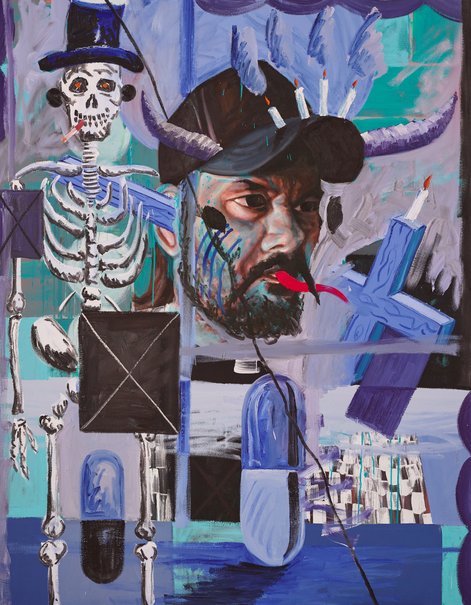 The subject of David Griggs’ painting – his seventh in the Archibald Prize – is film director Warwick Thornton.

In 2012, Griggs started work on a script for his first full-length film. ‘Over the next few years fellow artists who knew about my project would say things like, “Griggs, you need to meet Warwick Thornton, he is so amazing”,’ says the Sydney-based artist.

‘I always felt very shy at the thought of running any ideas past one of Australia’s most progressive film directors – I mean, the guy made Samson and Delilah. But I eventually got to know Warwick through mutual friends. Every now and then people enter your life who exude urgency, passion, anger and sheer genius. Warwick is one of them. His new film Sweet country left me in tears and with goosebumps. It will not only change the way we view Australian cinema, it will change the way we view ourselves,’ says Griggs.

‘I felt the only way to paint Warwick was to immerse him in a field of symbols from his own films. I felt I knew him well enough to simply let rip and allow his presence to dictate the energy and movement on the canvas.’

Griggs is also represented in this year’s Sulman Prize.